By Miranda Raye on February 14, 2018
Advertisement 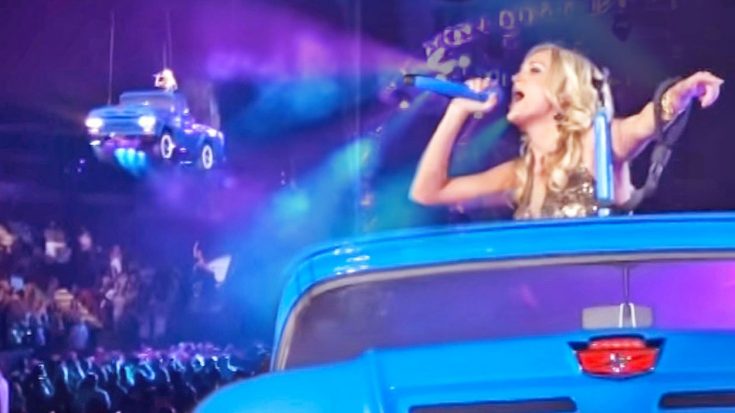 There’s a good reason why Carrie Underwood was given the Touring Headline Package of the Year award at the 2010 ACA Awards. Her Play On Tour, which kicked off in March 2010, was as spectacular as could be, with a number of moving set pieces and elaborate props.

For two weeks, Underwood rehearsed her tour in secret so that no surprises were spoiled for her fans. When opening night of the tour kicked off, people were blown away by what they witnessed.

Underwood’s shows featured interchangeable stage backgrounds, a virtual duet with Randy Travis, and at one point, she even swung around on vines. As cool as all of that sounds, we haven’t even mentioned the most jaw-dropping moment of her set.

Right in the middle of each concert, fans would be treated to a visual projection of Underwood strutting down the streets of Nashville and Hollywood. Off to the side, the real-life Underwood was getting roped into a floating blue pickup truck, which eventually started to cruise over the crowd.

As the truck paraded through the air, Underwood started singing the John Denver classic, “Take Me Home, Country Roads.” The combination of the beloved song and her astonishing entrance made that moment a standout part of every single one of Underwood’s shows.

There’s no shortage of videos out there that show Underwood singing “Take Me Home, Country Roads” as she soars above a packed crowd of fans. One of our favorite videos comes from her show in Reading, Pennsylvania.

If you didn’t happen to snag any tickets to Underwood’s Play On Tour, be sure to watch her performance below. It truly is spectacular!