Carrie Underwood Ends 2016 Tour With “I Will Always Love You” 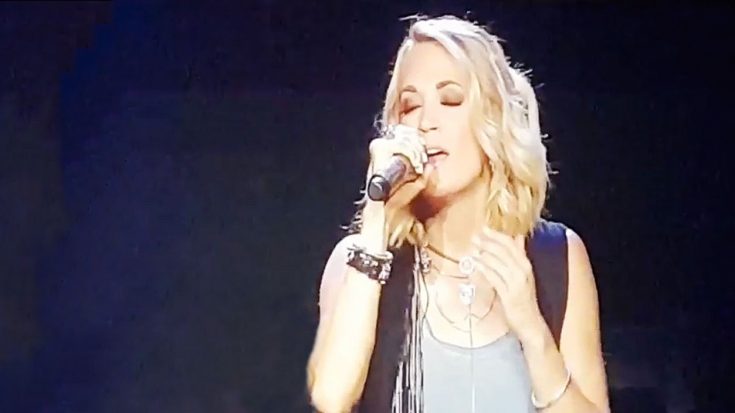 From the start of 2016, Carrie Underwood was on the road for her Storyteller tour. The tour kicked off on January 30 and finally concluded on November 28. By the time the it came to its end, Underwood had performed at a total of 92 shows.

But the Storyteller tour wasn’t the end of Underwood’s time on the road in 2016. Right after it wrapped up, she followed Keith Urban to Australia and New Zealand to perform with him on his Ripcord tour there.

On December 17, Underwood brought an emotional conclusion to her busy year when she performed her final show of 2016 in Brisbane.

Throughout the Storyteller tour, Underwood performed a cover of Dolly Parton‘s “I Will Always Love You.” So when it came time for her to bid goodbye to her fans and tour for 2016, she felt that the song was the appropriate way to do so.

A fan captured a video of Underwood’s performance and shared it on YouTube for all to witness. Seated on a stool at center stage, Underwood’s sole accompaniment was a single acoustic guitar player. With nothing to cover up her voice, Underwood was able to sing in a soft, hushed tone that added further to the emotional nature of her performance.

There were also plenty of Underwood’s signature powerhouse moments in the performance. If you want to see a true showcase of vocal talent, just wait until Underwood gets to the second chorus. The way she plays with the volume and style of her voice will give you chills and make you tear up all at the same time.

Tune in to the video below to see Underwood’s heartfelt goodbye to her 2016 tour family and fans. We think this was a fitting way for her to end her year, don’t you?