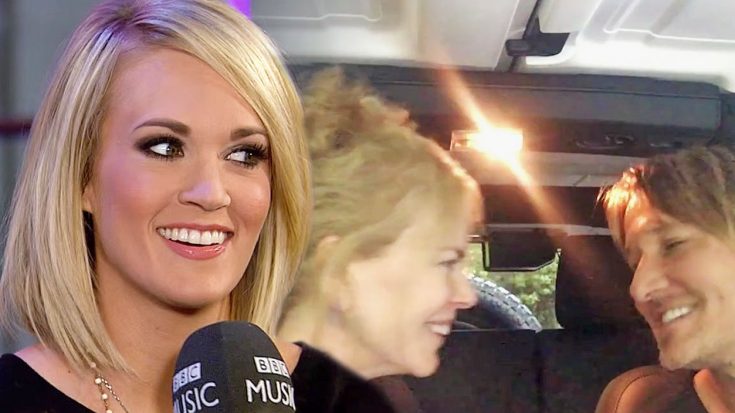 When it came time for Keith Urban to pick a duet partner for one of his songs on Ripcord, Carrie Underwood was a no-brainer. Urban selected Underwood to sing with him on a pop-infused track called “The Fighter,” and a video for the duet has gone viral.

In the video, Urban and Kidman sit down in their car and crank up “The Fighter,” then proceed to adorably lip sync along with it. Urban obviously took on his part, while Kidman tackled Underwood’s role in the track.

As of press time, that video has nearly 53 million views. But despite its immense popularity, Underwood had not responded to the video until now.

Underwood has been touring New Zealand and Australia with Urban, and the two of them recently performed “The Fighter” in person for the first time. With so much attention focused on the song, it was only a matter of time before someone asked Underwood what she thought of the Urban/Kidman duet.

Speaking to the Today Show, Underwood joked that Kidman is trying to steal her part and replace her in Urban’s duet.

As adorable as Kidman was in her lip sync duet with Urban, we don’t think that Underwood has any reason to be concerned. She was the perfect choice to sing “The Fighter” with Urban, and he knew it!

Tune in below to watch Underwood’s full reaction to Urban and Kidman’s viral “Fighter” duet. Then be sure to catch that video below as well.