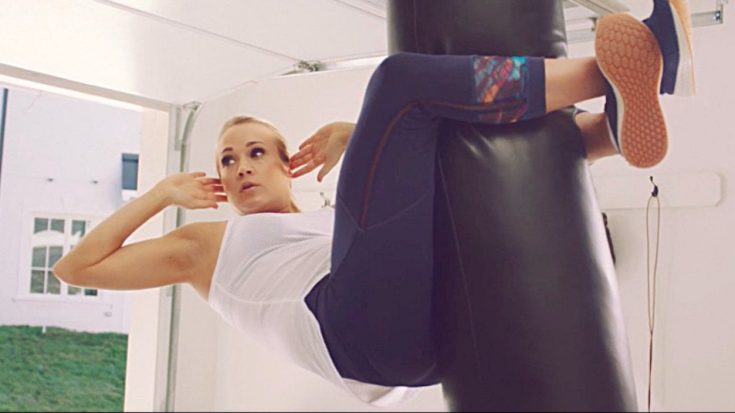 We haven’t seen much of Carrie Underwood since she suffered a nasty fall at her home in November. The fall left Underwood with an injured wrist that required surgery and 40-50 stitches in her face.

She’s kept a low-profile since then, telling fans that it may be some time before she’s willing to show them her scars. While Underwood has shared a few photos of herself since her fall, all of them cover or hide her face in some way.

Even though Underwood hasn’t made a public appearance in some time, her power anthem “The Champion” has kept her in the spotlight. The song and its accompanying videos were recorded long before her fall, and have been huge hits.

“The Champion” has inspired people to get up and get moving, with many choreographing dances and workout routines to the track. Some of these videos have caught Underwood’s attention, and she has shared them on her own social media accounts.

Finally, we got a brand-new workout video from Underwood herself when she shared a new clip promoting her athletic clothing line, CALIA by Carrie. While the video is new to us, it appears it was filmed some time ago, since Underwood willingly shows her full face at several points throughout the video.

It doesn’t even matter that it’s not a “current” video of Underwood, because it’s a darn impressive one. Underwood flaunts her fit physique throughout the video, proving just how strong her body is.

At one point in the clip, Underwood supports herself by wrapping her legs around a punching bag. She keeps herself held up with the sheer strength of her legs while doing crunches at the same time. That’s insane!

Tune in to the clip below to cat Underwood’s intense workout routine. She never ceases to amaze us!

Sometimes it’s spinning while your laundry is. Sometimes it’s turning work breaks into sweat breaks. How do you work it out? Carrie Underwood