By Jennifer Pernicano on November 3, 2017
Advertisement 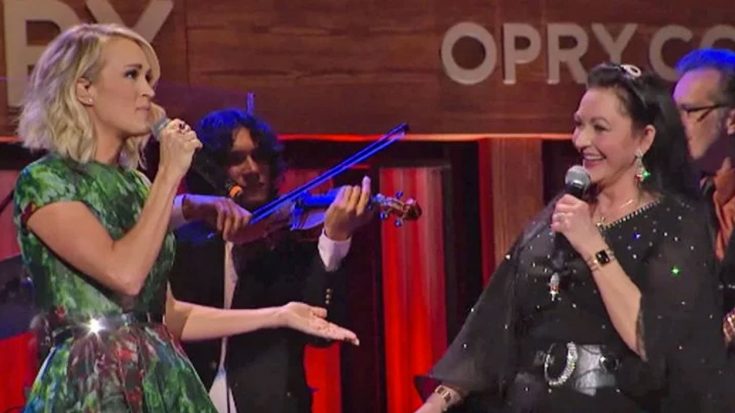 The legendary Crystal Gayle was scheduled to perform at the Grand Ole Opry, which was taking place at the famed Ryman Auditorium, on November 15, 2016. Also on the bill were Brothers Osborne, Marty Stuart, “Humble and Kind” writer Lori McKenna and many more.

Gayle began singing her classic hit “Don’t It Make Your Brown Eyes Blue” for adoring country music fans when she was joined by a special guest. As soon as her surprise guest appeared, the audience went nuts – this was clearly a huge shock to everyone!

Carrie Underwood emerged from backstage to help Gayle finish the song and they sounded incredible together. Underwood took the higher harmony, while Gayle sang the low melody for the last bit of the 1977 hit.

“Don’t It Make Your Brown Eyes Blue” is Gayle’s most successful song and began her country-pop crossover career. It peaked at number one on the Billboard Hot Country Songs chart and number two on the Hot 100 chart. It has since become a staple in all her live shows.

Since Gayle and Underwood pulled this off, Underwood and the Grand Ole Opry wanted to surprise the country legend with something she didn’t see coming!

Following their short duet, Underwood invited her to become an official member of the Grand Ole Opry. Before she could even finish the question, Gayle responded with, “I would love that!”

Crystal Gayle Invited To Be Next Opry Member

Underwood announced that her induction ceremony would take place on January 21. Gayle, who has been in the country music industry since 1970, said, “I’ve always felt like I was a member of the family, and this is just so special, thank you!”

Now that she is a member, it is officially a family affair. Her sister, Loretta Lynn, has been an Opry member since 1962. Lynn was in attendance to welcome her youngest sister into the historic Grand Ole Opry family!

Gayle celebrated her Opry invitation with a Facebook post. She shared a photo of herself and Underwood backstage.

What a nice surprise at the Ryman tonight. I am honored and thrilled to be invited to join the Opry family by Carrie…

“What a nice surprise at the Ryman tonight,” she wrote as the caption. “I am honored and thrilled to be invited to join the Opry family by Carrie Underwood. It was also great singing with Carrie, one of the best female vocalists ever. Love you, Carrie!”

Watch both surprises in the video below! Your heart will fill with joy watching Gayle’s reaction to Underwood’s invitation.