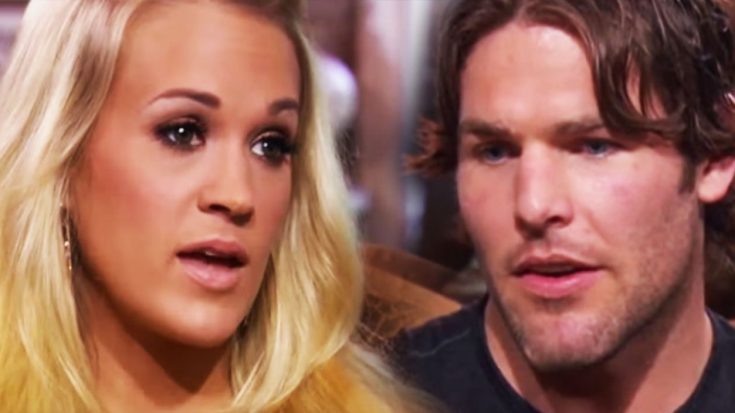 The country superstar had tears streaming down her face after seeing what her husband had written just days before.

Carrie Underwood, has been married to NHL player, Mike Fisher for 6 years and they have welcomed a beautiful baby boy into the world and even hinted that they’re aiming to have a larger family – but in one short moment she was left in tears after reading what he had written about her.

In a new article published by The Players’ Tribune, hockey legend Mike Fisher opened up about his experience with the sport and the massive obstacles he had overcome in life as a hockey player.

One of these involved his wife and he wasn’t afraid to dig down deep and explain how this decision had affected his entire life.

Shortly after Fisher and Underwood had wed, he was edging toward being traded from the Ottawa Senators to another NHL team, but at the time he and Underwood were splitting the time between Canada and Nashville – so getting traded meant a lot of changes for both of them and, possibly, a lot of strain on their relationship.

Luckily, he had an incredible relationship with his team owner and general manager – and when the time came for him to be traded, they did one of the most heartwarming things they could…

“I knew I was incredibly blessed to be going to Nashville,” Fisher writes about being traded. “When I was packing up my stuff to go to the airport, I got a call from Eugene Melnyk, the owner of the Senators. He thanked me for my time in Ottawa, and then he said something I will never, never forget.

He said,’You know Fish, I just wanted you to be with your wife.’

When trade talks had heated up, a few teams had been interested in me, but Eugene and Bryan [Murray, GM] agreed to make sure that my destination would be Nashville. They could have traded me anywhere, but they were genuinely looking out for me and my family. That’s what makes hockey such a special sport, even at the NHL level. Yes, it’s a business, but the amount of good human beings I’ve run across in this sport is just incredible.”

This heartwarming and beautiful story about his general manager and owner’s gift to him so that he could be with his wife more would probably bring anyone to tears…and that includes Carrie Underwood.

As she revealed on Twitter after reading the article, “This is amazing. Made me cry…”

Such a great love story!

Watch the video below where Carrie Underwood sings the song she wrote about the incredible love of her family in “What I Never Knew I Always Wanted”.