Carrie Underwood Reminisces With Audience In Powerful ‘Remember When’ Tribute 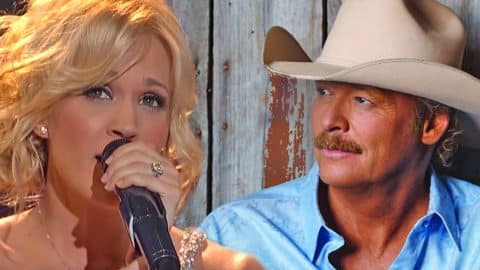 Carrie Underwood is no stranger to the big stage these days due to her incredible vocal abilities and her uplifting fan base which is only growing by the day! However, Underwood wasn’t always an award winning singer, songwriter, and actress. From rural Checotah, Oklahoma, Underwood grew up raising animals on her family’s small town farm and singing for her local church. Underwood often incorporates her small town experiences into her popular music with her endearing song “I Ain’t In Checotah Anymore” being a prime example.

Underwood graciously found fame back in 2005 after snagging the title of American Idol‘s season four winner! It was only uphill for this sweet, small town farm girl as she would later earn a whopping 12 Academy of Country Music awards, in addition to many other honors, and later be acknowledged as Rolling Stone‘s female vocalist of her generation!

However, Underwood still often reverts back to her hometown roots and takes pride in remaining humble. Back in July of 2012, Underwood performed at the Grand Ole Opry and did a major throwback to her childhood when introducing her song choice.

“And I get to remember my very first concert which [was] with Mr. Alan Jackson and I think that is definitely part of what led me here.. My 10-year-old self wanted to..sing with or around Alan Jackson if that was at all possible..”

She dedicated her rendition of her favorite Jackson hit, “Remember When” to the man himself, while the audience erupts with cheers of approval.

Underwood’s impeccable pitch and vocals take the crowd down good ole’ memory lane and remind us to enjoy the once in a lifetime journey that takes us to our destinations, whether it’s beyond our expectations or exactly what we hoped for.

Check out this powerful performance for yourself!