By Miranda Raye on December 27, 2017
Advertisement 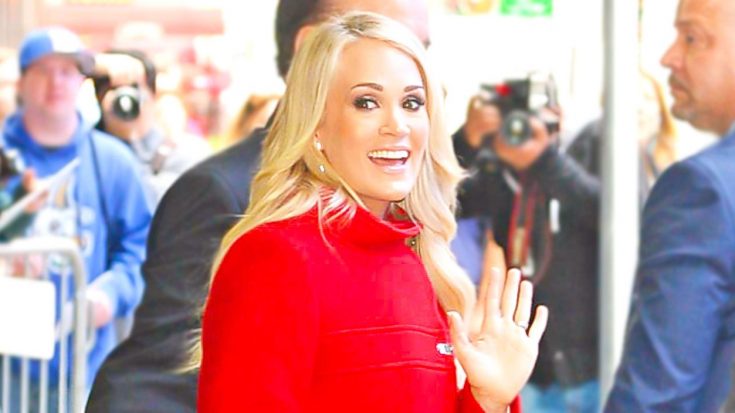 Carrie Underwood was certainly in good company this Christmas!

Underwood has been resting at home ever since she suffered a fall on the steps of her house in November. She had to have surgery to help repair a broken wrist, and has been trying to take it easy ever since.

Because of this, Underwood’s social media updates have been few and far between. But she still made sure to wish her fans a merry Christmas and happy holiday season, and did so through an adorable photo.

Rather than share a photo of herself, Underwood opted to post a photo of her two dogs, Ace and Penny. The two pups have their own Twitter account, which sometimes features different photos than the ones Underwood shares on her own account.

On Tuesday (December 26), Underwood posted a photo to Ace and Penny’s Twitter that showed her cozy Christmas celebration. The two dogs were cuddled on a dog bed in front of the fireplace, which had a few Christmas decorations and a tree situated next to it.

Since Christmas had passed, Underwood made sure to include New Year’s wishes in her message as well. She captioned the photo simply, writing, “Wishing you a warm and happy holiday season!“

Wishing you a warm and happy holiday season! pic.twitter.com/9ZSGTu9fnG

Anyone who knows anything about Underwood knows how much she loves animals, especially her dogs. Ace has been with her the longest, and has appeared with her in a number of photo shoots.

One could argue that Underwood’s love for Ace inspired her to record the song “The More Boys I Meet,” which appeared on her 2007 album Carnival Ride. Written by Scott Kennedy and Steve McEwan, the song is all about a woman who finds herself falling more and more in love with her dog after meeting several undesirable men.

You can watch Underwood sing “The More Boys I Meet” in the clip below.

We hope that Underwood, her family, and her pups all had a Merry Christmas together!