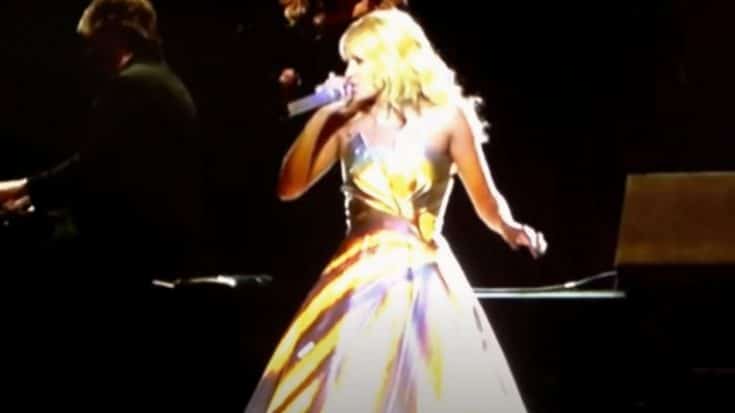 Carrie Underwood is known for delivering stellar live performances, but her 2013 Grammy performance is often considered one of her best.

Underwood appeared on stage wearing a simple, gray-colored ball gown, accompanied by a single band member playing the acoustic guitar. She kicked off her performance by singing a stripped-down, simplistic version of her 2012 hit song “Blown Away.”

Suddenly, while Underwood held out a long note at the end of “Blown Away,” the curtain behind her went up, revealing the rest of her band.

Shortly after that, two blue dots of light appeared on the bottom of Underwood’s dress. As Underwood started singing her other 2012 hit, “Two Black Cadillacs,” the two blue dots turned into a spiral design, which covered the entire front of her dress.

The designs on Underwood’s dress changed throughout the performance, in one case turning into a night sky with exploding fireworks.

At the end of the performance, Underwood’s dress changed to display the bright orange wing of a Monarch butterfly. After a little while, the dress transformed again to display a moving image of dozens of butterflies.

The screens behind and beside Underwood filled up with the butterflies as well, creating the illusion they were flying into the audience. That audience erupted into a round of cheers and applause for Underwood before she even finished the last note.

Underwood’s performances are always stunning, but her color-changing dress made this one an absolute must-see! Check it out below.