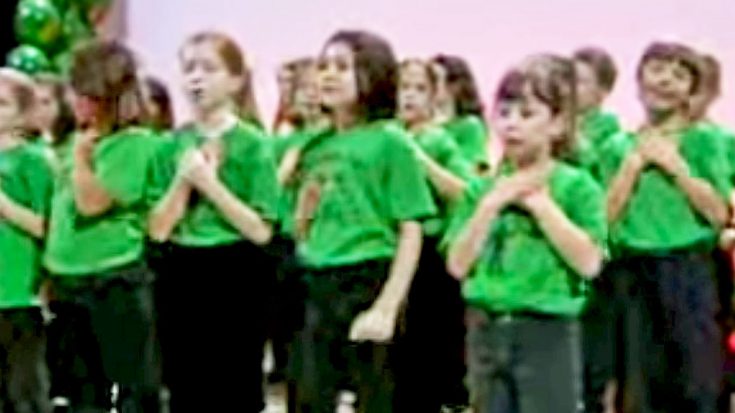 Alabama‘s classic hit, “Angels Among Us,” is a song that has always been associated with children. The fact that Alabama had a children’s choir singing with them on their recording of the song is likely a huge reason why.

If you look through YouTube, you’ll find a whole host of videos showing children singing “Angels Among Us.” Some are hardly out of diapers, while others are in elementary school.

No matter how old they may be, children always seem to bring out the inner sense of innocence contained in the lyrics of “Angels Among Us.” That’s why it’s always such a joy to hear children sing it.

Your heart will surely turn to mush once you watch the video we have to share with you today. This video, which was uploaded in 2008, shows a group called the Kids Healing Kids® choir. The group is a volunteer choir based in Holland, Michigan, and is made up of children in the third, fourth, and fifth grades.

Kids Healing Kids is a #choir of #children who #sing for people who are having medical treatments, to offer #encouragement and #beauty. These kids #SingforaLifetime – for other people. #kindness https://t.co/nbX7FGDGAo https://t.co/TPO4mGQ6no

This particular choir has a special purpose that goes far beyond simply serving as a form of entertainment. Their whole mission is to bring joy to children who suffer from serious illnesses. They film videos of themselves singing, such as this one of “Angels Among Us,” and provide the videos to hospitals and children around the world.

We’re sure that their video for “Angels Among Us” brought plenty of smiles to the children who received it. Their video starts with a boy and girl standing at the front of the group, and they open the performance by each singing a solo.

Eventually, the two young soloists join the rest of the group to bring a conclusion to their performance. Their sweet voices were the perfect match for the song, that’s for sure.

Go ahead and watch the video below to see the choir’s performance of “Angels Among Us.” It’s wonderful to see children with such a passion for music.