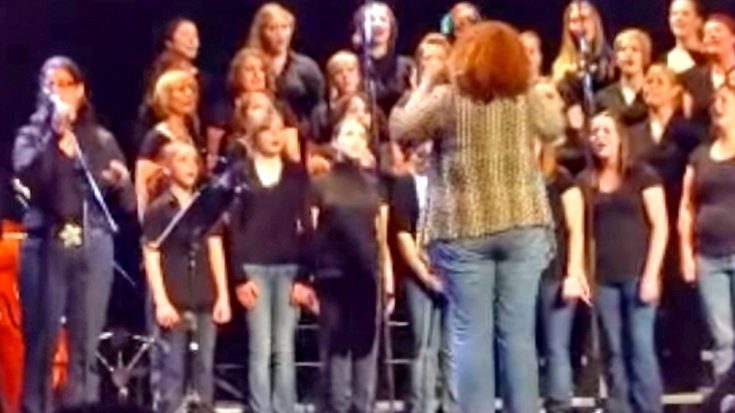 Have you ever wondered what “Hallelujah” would sound like if it was written about the story of Jesus? Well, wait no longer – because one talented woman has done just that!

Bringing the story of Jesus and the meaning of Easter into one of the best songs ever written, singer/songwriter Kelley Mooney blessed the world with an unforgettable performance during this special choir concert.

I just played at the Bluebird Cafe in Nashville! pic.twitter.com/vVDjnmrv9l

Invited as a special guest to the annual concert of the Chorale Voce dell’Anima, Mooney appeared before the song to express exactly how she was inspired by the story of Easter to rewrite the lyrics to Leonard Cohen‘s magnificent classic, “Hallelujah”.

“At the end of church [the priest] asked if I would sing Leonard Cohen’s ‘Hallelujah’ for Easter Mass,” Mooney explained to the audience in a warmhearted tone. “I went home…and rewrote the words according to the Easter story and Jesus’ journey up to The Cross.”

Kelley Mooney's version of "Hallelujah" is an online hit and landed her on Billboard charts. She updates us 96.1 #pei pic.twitter.com/xU51XPycsH

Not too long afterward this happened, Mooney says, every single time she sang her own re-worked version of this beloved and cherished classic – people started asking her for a recording of it. Unfortunately, she had to turn them away, but those interactions inspired her to put it on her next album – and she did!

Wishing you all a very happy Easter <3 pic.twitter.com/PSsekqptKC

In this one-of-a-kind performance, Mooney and this truly-magical women’s choir work together in harmony to deliver a heart-melting Easter version of “Hallelujah” that will really remind everyone who watches what the true meaning of Easter is.

Watch the full performance below and let us know what you think in the comments!