Chris Stapleton And Justin Timberlake Harmonize In 2018 Duet ‘Say Something’

By Jennifer Pernicano on January 25, 2018
Advertisement 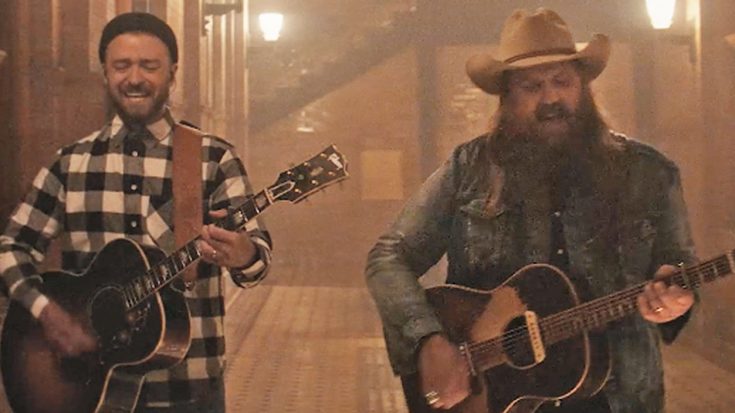 Even before Timberlake announced his 2018 album Man of the Woods, rumors were swirling that the two teamed up for a new song, and all was confirmed when he posted a photo of the track listing with “FEAT. C.S.” next to the song “Say Something.”

The 16-track album is Timberlake’s first since 2013’s 20/20 Experience, which included the song “Drink You Away.” Timberlake and Stapleton sang “Drink You Away” and a cover of George Jones’ “Tennessee Whiskey” at the 2015 CMA Awards.

Since then, it’s been regarded as one of the best CMA Awards moments of all time, and for good reason! Although Stapleton was a very successful songwriter, and performer, before this, he was relatively unknown to the mainstream country fan, and this performance sky-rocketed his popularity.

On Jan. 26, 2018, Timberlake took to social media to announce that “Say Something” would be available the very next day. Stapleton teased their new collaboration on social media with a short clip of the music video with the caption, “Proud to be a part of this my friend.”

Proud to be a part of this my friend @justintimberlake #saysomething

Just from this clip, everyone was ecstatic about the new song! When 12 PM Eastern Time rolled around, fans were not disappointed with this new soul-infused song featuring one of the greatest country vocalists out there right now.

The video begins with Timberlake mixing the song together and singing a solo. As he walks around the venue seeing people in his band, we finally see Stapleton around the 2:50 mark. For the next minute or so, the two singers are walking with their guitars before finally meeting face-to-face. After a short pause, they look up to see the stairs filled with singers joining them in for the chill-inducing chorus.

Take a listen to their new duet “Say Something” below and let us know what you think in the comments!