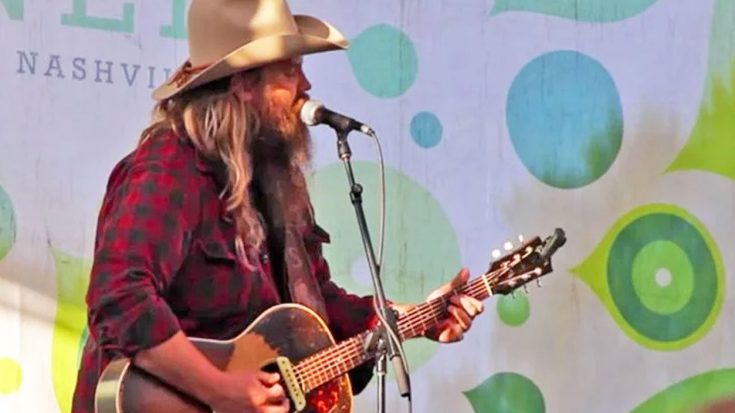 The intricate process of writing, choosing, and recording songs can more often than not baffle those who aren’t all too familiar with the technicalities.

While some songs are glorified hits and lifted straight to number one on the charts, others tend to be placed on the back burner until their moment in the big leagues can happen. While tragic, these decisions are made for good reason.

In a clip dating back from October of 2014, country music star Chris Stapleton is seen performing in Nashville on a very simple and unadorned stage, joined by his lovely wife Morgane.

The couple kicked off a song that is not familiar to audience members and viewers, yet we can’t get enough of it before Stapleton even begins his vocals! Opening with a raw, classic guitar intro, the song titled “You Should Probably Leave” transitions into incredible vocals that strikes a familiarity with every viewer!

The sexy number embodies the simple message that two people who both want to do bad things are aware of certain consequences, ultimately deciding that one of them must leave.

Carried by Stapleton and his wife’s impressive vocals, the slow tempo tune not only wows viewers during the performance, but it continued to stay with fans who keep pressing the internet with questions on where they can download this song!

Well, thanks to an announcement in August 2020, Stapleton has finally decided to include this song on an album! The album titled Starting Over, will be released on November 13, 2020.

Starting Over out Nov 13. Pre-order the album and listen to ‘Starting Over’ via the link in bio.

Listen to the song below.