By Miranda Raye on December 12, 2017
Advertisement 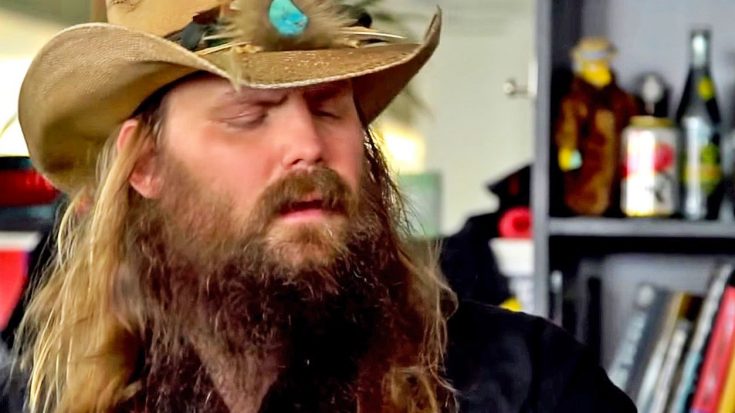 Since his breakout performance at the 2015 CMA Awards, Chris Stapleton has been the undisputed ruler of country music. His albums have lingered in the top spots of the country charts for the past two years and he has won awards left and right.

Every time we watch Stapleton sing, it becomes all the more obvious why he’s one of country music’s brightest stars at the moment. It becomes even more obvious when we hear him sing acoustically, like he did during a special session with NPR a couple years back.

Stapleton’s voice is perfect for unplugged arrangements, as it has enough power and raw strength to carry itself. So it’s no wonder why some of his softer, more acoustic-based tracks are considered to be a few of his best.

One such song is “Whiskey and You,” which Stapleton co-wrote with Lee Thomas Miller. But although he wrote it, he wasn’t the first to lay down the track. Instead, the original artist who recorded “Whiskey and You” was actually Tim McGraw!

McGraw’s version of the song was never released as a single, so it didn’t generate much attention. A larger spotlight was cast on it once Stapleton included it as a track on his 2015 album Traveller. Aaron Lewis helped further its popularity when he recorded it for his 2016 album Sinner.

There are numerous videos floating around out there of Stapleton performing “Whiskey and You,” but the one from his NPR session is arguably one of the best. The video shows Stapleton standing in a library-like room with nothing but his own guitar to accompany him. He doesn’t even have the support of his wife, Morgane, who typically sings backing vocals when he performs.

The acoustic arrangment allowed Stapleton to sing “Whiskey and You” the way it was always meant to be performed…straight from the soul. There’s no barrier between him and his voice, so you can easily hear every hint of pain and suffering hidden behind the lyrics.

Tune in to the clip below to catch Stapleton’s fascinating performance of “Whiskey and You.” It’s sure to have you hooked from start to finish.