By Jennifer Pernicano on May 10, 2017
Advertisement 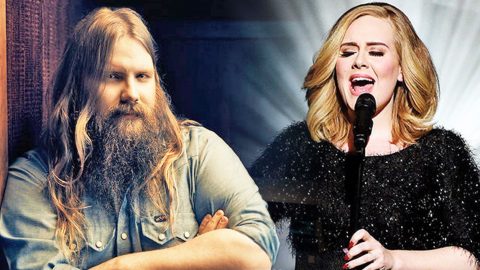 In just a little over a year, Chris Stapleton has become one of the best-selling and most awarded country singers of his time.

He broke down barriers at the 2015 CMA Awards with his epic sweep of awards, while still unknown to most country music fans, and his album Traveller re-entered the Billboard charts at No. 1.

Before releasing Traveller, he spent many years as a songwriter, penning some of country music’s biggest hits for George Strait, Luke Bryan, Josh Turner, and many more. While writing hit songs, Stapleton joined the bluegrass band The SteelDrivers, and had lots of success, earning themselves three GRAMMY nominations in 2009 for songs off their self-titled album.

Included on that album was a Stapleton written tune by the name of “If It Hadn’t Been For Love”. Legend has it that when superstar singer Adele was in her early years of touring, her bus driver played the song while driving and she fell in love with it.

In a recent interview with radio host Howard Stern, Stapleton spoke with him about Adele actually recording “If It Hadn’t Been For Love” as a bonus track to the UK version of her hit album 21.

“This was before Adele was Adele. She had [released] 19, and she’d gotten New Artist at the Grammys or something, but it wasn’t like she was Adele,” he told the shock jock. “So I remember [Irwin] sent me an email, and he’s like, ‘Hey, Adele is doing this song on YouTube. You should really try to get your publishing company to push her to put it on a record or something.’ And I was like, ‘That’s great, Ken. Who’s Adele?’ That was literally my response.”

Stern later asked him what he thought of Adele’s version, which is a different key.

“I love her as a singer and as an artist. I always like to write the songs, and they get turned loose into the world and who knows what happens to them. That’s the joy of being a songwriter. You get to hear what other people do, interpretation-wise,” he said.

Take a listen to the interview below.

Enjoy both The SteelDrivers’ and Adele’s version of “If It Hadn’t Been For Love” below.