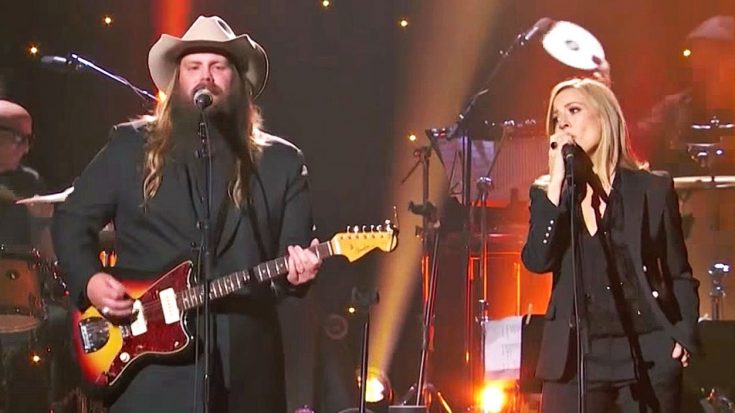 What do you get when you put Chris Stapleton and Sheryl Crow together on a hit Beatles song? Perfection, that’s what.

Back in 2015, Stapleton and Crow came together to honor Beatles member John Lennon during an all-star concert established to celebrate what would have been his 75th birthday. The two were joined by Brandon Flowers, the lead singer of the rock band The Killers.

Together, the trio sang what is known to be one of the Beatles’ best songs. Titled “Don’t Let Me Down,” the Beatles recorded their first version of the song in 1969. They performed it twice during their famous rooftop concert, which also occurred in 1969.

Released as the B-side to another single, which was titled “Get Back,” “Don’t Let Me Down” reached the 35th spot on on the U.S. Billboard Hot 100. Its popularity led to the creation of numerous covers, including ones by Dillard and Clark, The Black Crowes, and Keith Urban.

We’d have to say that Stapleton, Crow, and Flowers’ rendition of the song is one of the best out there. While everyone had their chances to shine, Stapleton’s voice was the standout sound. Even when all three artists were singing together, his voice soared over Flowers’ and Crow’s, though not in an overpowering way.

The trio’s voices served as ideal complements to each other, as they all had a rough, soulful sound. Such a sound was fitting for “Don’t Let Me Down,” which definitely has a bit of a bluesy vibe.

We could talk about this performance all day, but we think it’s best if you just jump down below and watch it. So stop everything, and check it out!

After watching this, we’re anxious to see these three collaborate again. They work so well together!