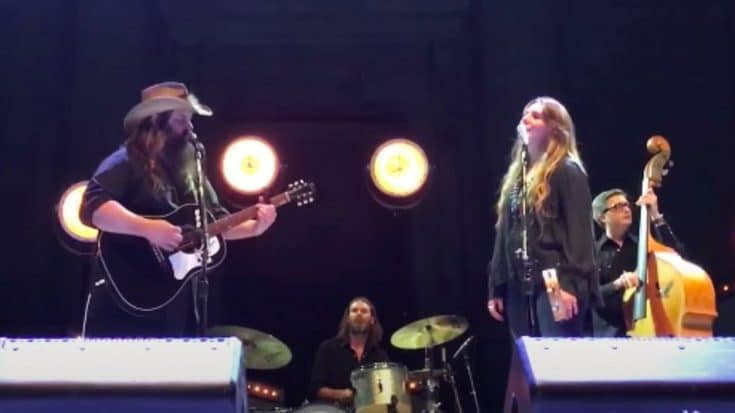 Following the death of Merle Haggard on April 6, 2016 country stars paid tribute to him by covering some of his greatest songs. One artist who made sure to honor “The Hag” during several of his shows in the weeks following his passing was Chris Stapleton.

Shortly after Merle’s death, Chris and his wife, Morgane, paid tribute to Merle by singing his song “Today I Started Loving You Again,” much to the delight of the crowd. After that, Chris and Morgane have continued to honor Merle as they’ve traveled across the country for various performances.

On April 23, 2016 Chris and Morgane chose to sing one of Merle’s most memorable songs, “Silver Wings,” during a concert in his home state of California. As soon as Chris started singing, the crowd roared with cheers and applause, and continued cheering at various points during the performance.

For the most part, Chris sang on his own, and you can hear a hint of pain in his voice as he sings the beautiful words written by the legendary “Hag.” Morgane joined in on the chorus, and the combination of the couple’s voices created a haunting, emotional sound that was nothing short of breathtaking.

Chris finished off their performance with a gentle stroke of his guitar without saying another word. Really, no words needed to be said, because his emotional performance with Morgane spoke volumes about how much respect they have for Merle.

Watch Chris and Morgane’s tribute performance of “Silver Wings” in the video below.

It’s still so hard to believe that Merle is really gone. May he rest in peace.