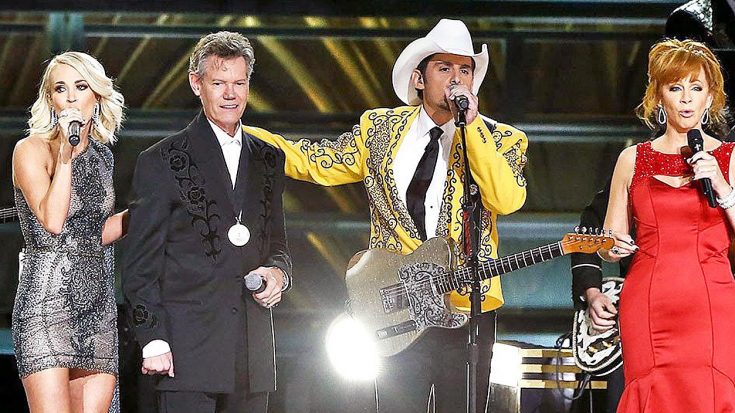 With this year being the 50th CMA Awards, we knew well in advance that the night was going to be all about celebrating country music’s incredible past and the artists who played a part in it. But other than that, most details of the CMAs were kept tightly under wraps, leaving the show as a surprise to those who tuned in.

Even though they wouldn’t say exactly what was happening, the CMA kept hinting toward the fact that the eight-minute opening number was going to “make country music history.” Co-host Carrie Underwood furthered the excitement in an interview leading up to the ceremony, saying, “It’s going to be a moment that people talk about for a long time to come.“

It turns out that Underwood was right on the ball, because now that we’ve seen the opening number, we completely understand the reason for all of the hype.

The performance a major tribute to country legends of the past. Vince Gill kicked off the show by honoring the late Merle Haggard with “Mama Tried” while Merle’s son, Ben, played guitar with him.

Later, Carrie Underwood came in and sang a snippet of Tammy Wynette‘s iconic song, “Stand By Your Man.” Her powerful voice filled up the room, causing everyone in the room to cheer.

Reba McEntire revived her red dress look (though it wasn’t that one), and made a powerful entrance on stage to sing “Fancy.” Brad jammed out on stage with Ricky Skaggs, Alan Jackson sang “Don’t Rock the Jukebox,” and the awesome performances just kept coming!

The whole thing concluded in the most perfect way possible, when all of the artists on stage and in the crowd sang Randy Travis‘ “Forever and Ever Amen,” with Travis singing the final line.

And those are just the highlights of this stellar performance, it’s one you have to see for yourself to believe!

Relive the spectacular CMA opening by watching part of it in the video below. There’s no doubt in our minds that this performance will be remembered by generations of country fans for years to come.

#CMAawards50 "Forever and Ever, Amen"

12 of Country's favorite songs IN THE FIRST 10 MINUTES! Watch #CMAawards50 NOW on ABC!