Concertgoers Heroically Go Above & Beyond To Help Victims Of Shooting

By Manly Bryant on October 2, 2017
Advertisement 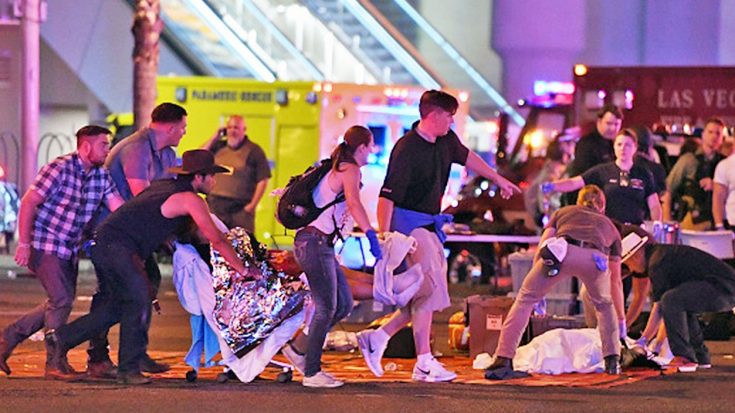 At approximately 10:08 p.m. Sunday (Oct. 1), a gunman opened fire on the attendees of Route 91 Harvest Music Festival in Las Vegas, Nevada during Jason Aldean‘s set. Since the attack, more than 55 people are reportedly dead with an upwards of 500 injured, the incident being described as the deadliest mass shooting in the history of the United States.

While the “act of pure evil” as described by President Donald Trump lacks any sign of humanity, the hundreds of people who put their lives on the line to help their fellow man acts as a light in what will surely be described as one of the darkest moments in modern American history.

Attendees of the concert turned into heroes as many commandeered trucks to rush victims to safety. In one incident, a couple driving by the scene pulled over to help take victims to the hospital, using their truck as a makeshift ambulance to help transport victims.

Couple uses their truck as a makeshift ambulance to carry victims of the Las Vegas shooting to the hospital. https://t.co/BZcrV0KCzL pic.twitter.com/JDMW9sTpRR

Another concertgoer noted that many military veterans jumped into action, saying the amount of bravery she witnessed was indescribable.

“It was everywhere. Thank God it was a country concert. You saw a lot of ex-military jumping into gear. I saw guys plugging bullet holes with their fingers. I saw police officers, while everyone else was crouching, police officers standing up as targets, just trying to direct people to tell them where to go. The amount of bravery I saw, words can’t describe what it was like,” reported one witness in the interview with NBC.

In an act of pure selflessness, 53-year-old Mike McGarry from Philadelphia threw himself on top of his children in hopes of protecting them from gunshots.

The personal tales of heroism, even in the face of such horror, are reminders of that humanity is ultimately good. https://t.co/NJ9SegeZOC pic.twitter.com/l0u0eBRDrN

The alleged shooter behind the attack has been identified as Stephen Paddock whom opened fire from the 32nd floor of hotel and casino Mandalay Bay where he was checked in.

If you would like to help the victims of the Route 91 Harvest Festival tragedy, you can donate here. For those looking to donate blood, locations of Nevada-based blood banks are listed below.