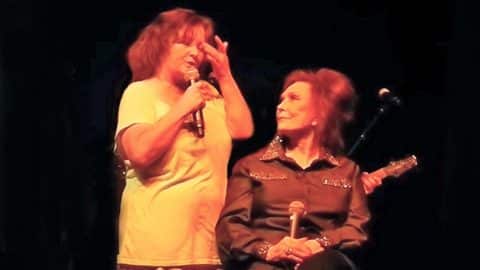 You know how the line in Blake Shelton‘s song, “Honey Bee” goes…”You’ll be my little Loretta/I’ll be your Conway Twitty.” Both stars in their own right, something magical happened whenever Conway and Loretta sang together. The two of them shared a bond like no other, one that remains strong decades years after Conway’s death.

Conway’s passing hit Loretta hard, especially since she was there with him on the day he died. As she told Nash Country Weekly, Conway had been on his way to visit her husband, Doo, who was in the hospital. But he collapsed on the way there, and was rushed inside.

Loretta was told to come in and tell him goodbye, and she begged for him not to go, saying “Now, Conway, you love to sing. You can’t leave. Don’t you leave me.”

Conway’s death left Loretta without her dear friend, but being as strong as she is, she managed to push through. Since she shared a close bond with Conway, Loretta is also close to his children, and performed a duet of her and Conway’s “Louisiana Woman, Mississipi Man” with his son, Michael.

On the date of that performance, Conway’s daughters, Kathy and Joni, along with Michael, stepped up on stage to present Loretta with a special gift. With Loretta seated beside her, Joni took the microphone and spoke about the gift, which Kathy’s husband was holding away from Loretta.

Joni said a few months prior, artist and country singer Ronnie McDowell called to tell her that he painted a special picture of Conway. Once Conway’s children saw the painting, they decided Loretta should have a copy as well. So they had a reproduction made and framed and presented it to Loretta.

When Loretta saw the painting, you could tell she was touched by what she saw. “Oh wow,” she exclaimed, before she asked to have the painting turned around so the crowd could see. The painting shows Conway later in his career looking into a mirror where he sees an image of himself as a young man.

After Conway’s kids presented the painting to Loretta, Kathy took the microphone to say a few words. She said that after all these years of Loretta speaking so highly of Conway, she wanted everyone to know how Conway felt about her:

“He loved her with all his heart. They were the best of friends. It was more than a friendship, it was a soul connection. It remains a soul connection. And God put Loretta in the hospital…when daddy collapsed. And after daddy had passed Joni and I were still in the room with him, and we looked up and Loretta walked in. And it was one of the most precious moments that I ever witnessed in my life. The love that she had as she said goodbye to daddy. He would have been so touched. But he loved you, and he loves you still. And some day when Loretta steps into heaven, his arm’s gonna open up and ya know what he’s gonna say…’Hello Darlin.'”

When it comes to Loretta, her feelings toward Conway are mutual. As she told Nash Country Weekly in 1994, “I’d have to say that knowing Conway Twitty has been one of my great pleasures in life.”

You can watch Conway’s children present their special gift to Loretta in the video below. It’s a real tearjerker, so keep some tissues close.