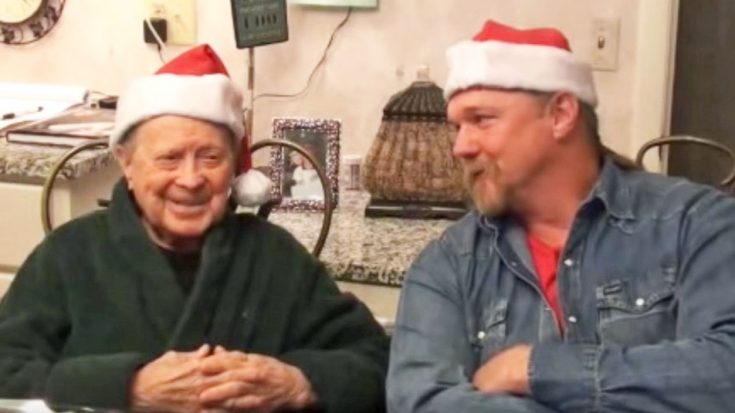 Just by looking at their physical stature, Little Jimmy Dickens and Trace Adkins seemed like the most unlikely of friends. But the opposite is the case. Despite their nearly two-foot height difference, the two country greats often saw eye-to-eye.

The two struck up a close friendship that lasted for years, and Dickens was the one who inducted Adkins into the Grand Ole Opry in 2003. In one of the Opry’s most memorable moments, Dickens stood on a chair so he could look right at Adkins as he asked him one of the most important questions ever…would he become a member of the Opry?

Of course Adkins couldn’t say no to his friend, and they remained close until Dickens’ death in 2015.

Back in 2010, Adkins sat down with Dickens to talk about some of their fondest Christmas memories. Per Adkins’ request, Dickens started telling him a story about what Christmas was like for him when he was young:

“We were poor but we didn’t know that. We thought everybody lived like we did. And I can recall more than one Christmas when I was a little bitty feller, getting an apple, an orange, and a popcorn ball for Christmas.”

Adkins couldn’t believe what he was hearing, and was unable to say anything but “really…” over and over again. That’s when Adkins went into sharing his favorite Christmas memory, and the two of them kept talking back and forth like that for minutes.

You can check out the clip below to watch Dickens and Adkins talk more about their Christmases growing up.

We’re sure that Dickens would be so proud of Adkins and where he is today. He’s currently working on a new album, which will contain the single “Lit.”

Like Christmas, “Lit” is all about celebrating the little moments and things in life that bring you joy. Be sure to catch the song’s lyric video below. Then, get yourself a Christmas present and download the single off of iTunes here!