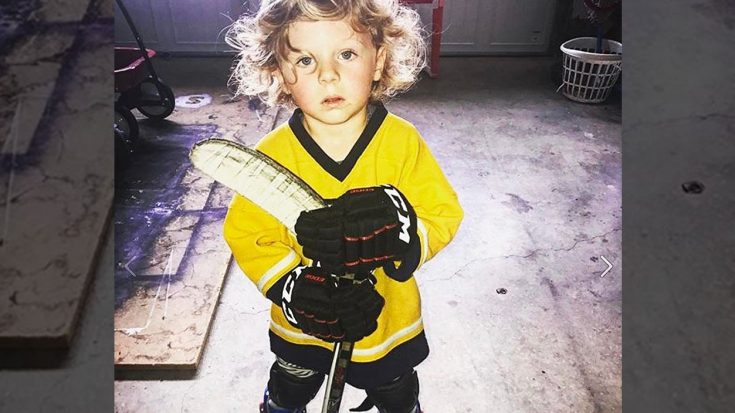 One country star had fans melting when him and his son took the spotlight to prepare their hockey game with an adorable performance of the National Anthem. One half of the country music duo Love & Theft, Stephen Barker Liles shared a heartwarming clip of his son Jett preparing for the Nashville Predators hockey game!

Recording the unforgettable moment, Barker Liles stood behind his son, sporting his Pred’s attire and hockey stick, as he beautifully sang the patriotic tune before knocking around the puck with his son. Jett was deeply respectful, listening to his father sing as he bowed his head on his stick and enjoyed the performance that authenticated their scrimmage.

I love the #preds so much! My dad & I been getting ready for the game tonight with our own garage hockey game! #goPreds #jettBarkerliles #ccmHockey @ccmhockey

The boy’s Instagram page was soon seen with an image of the fan in his hockey attire, captioned, “I love the Preds so much! My dad & I been getting ready for the game tonight with our own garage hockey game!” That sure sounds like an unforgettable memory for this little tyke!

You can watch the adorable performance below!

When your son is obsessed w/ hockey u have 2 sing the anthem before the big @predsnhl garage hockey game ! He is gonna freak out when we go tonight! #GoPreds @jettbarkerliles #jettbarkerliles