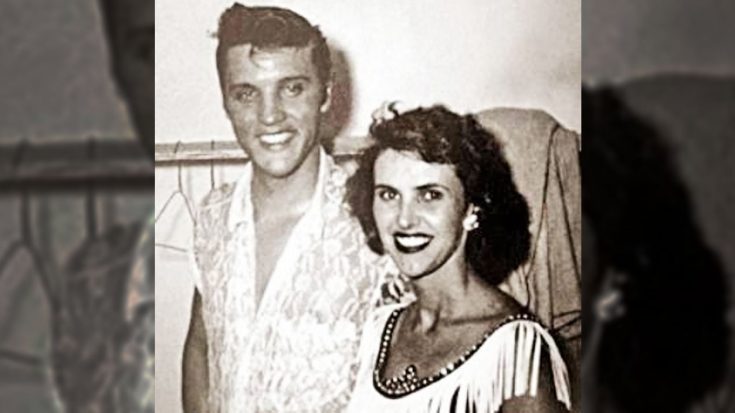 Before Elvis Presley was a massive star, he was a rock ‘n’ roll musician with big dreams. In 1955, he was a touring musician and was a regional star, from Tennessee to West Texas. On one of these tours, he met a young woman by the name of Wanda Jackson.

Jackson had just graduated high school but had a few songs under her belt, so she shared the bill with Presley. Sometime that year, the two began a romantic relationship, which was approved by her father, who traveled with her as a chaperone and manager.

She recently sat down with Fox News to talk about her own legendary career, Presley’s influence on her music, and of course, their relationship. Fox asked Jackson to describe her relationship with The King of Rock and Roll.

“He asked me to be his girl and I had his ring,” she said. “I wore it around my neck for about a year… But I lived in Oklahoma and he lived in Tennessee. So we didn’t see each other except on the tours that we did together. My daddy traveled with me. He wouldn’t let me go out with guys usually. But he liked Elvis really well.”

She explained that on a typical date, she and Presley would go see a movie and grab a burger afterward, but “it wasn’t long until he became so popular that we couldn’t go out after the show. When they would see that pink Cadillac, they knew Elvis was in there! So it got hard to get together. We were together until the first part of 1957. Then he went to Hollywood to start his film career.”

While their relationship didn’t last forever, she did keep that ring he gave her after all these years.

“I have it! My mother made sure she held on to it for me. She figured I wouldn’t keep it or something. But she did. She’s got a little note in there and it says it was given to me by Elvis in 1955.”

Not only did Presley give her a ring and lots of memories to look back on, he also encouraged her to break away from her country singer image to sing rock ‘n’ roll.

See the Queen LIVE in concert this Friday in Louisville KY at Headliner's Music Hall and Saturday at S.P.A.C.E in Evanston, IL! For ticket info visit www.wandajackson.com/pages/schedule.html

“I would tell him, ‘I can’t do that Elvis because I’m just a country singer! Besides, I’m a girl. I can’t sing that stuff.’ And he said, ‘I know you could if you try.’ He made me promise that I would try. I kept my promise. When I moved to Capitol Records, that’s when I recorded one of my first rock ‘n’ roll songs, ‘I Gotta Know.’ It was especially written for me. It has a little bit of a country kickoff,” she said.

Because of his influence, she became one of the first popular female rockabilly singers of the 50s and 60s. She is known as the Queen of Rockabilly or the First Lady of Rockabilly and was an inductee into the Rock and Roll Hall of Fame in 2009. Jackson is now 80 years old and still performs for her dedicated fans.

Take a listen to Jackson’s 2006 song “I Wore Elvis’s Ring” from her album I Remember Elvis below.