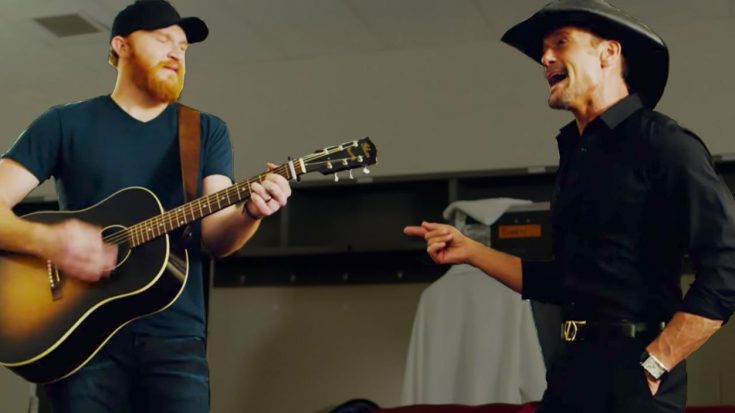 Whipping out a guitar backstage at his Soul2Soul tour, this country crooner recruits a young country singer to honor George Strait with a cover of his very first major-label single!

Tim McGraw has been performing some exclusive, backstage content with different friends and opening acts while traveling around with wife, Faith Hill, on their 2017 Soul2Soul World Tour – but this one might just take the cake!

McGraw and country singer Eric Paslay are standing up amid a series of couches and various stage equipment with McGraw’s band members all piled around when they kick off this dazzling cover of Strait’s 1981 single, “Unwound.”

His bandmates hop in after the first few strums of Paslay’s guitar, and the rousing sound of a twangy, fun, classic country hit echoes off the walls and fills the entire room in a matter of seconds.

Together, these talented musicians are clearly having a blast as they hoot, holler, and cheer on one another throughout this unforgettable performance.

Strait’s “Unwound” marked his first song to appear on the charts and was also his debut with a major label, MCA. It’s become a staple in any true country music collection.

At the tail end of this riveting jam session, McGraw gives a shout out to Strait remarking on Paslay’s killer performance.

Check out their cover of George Strait’s “Unwound” in the video below and let us know if you agree with Tim McGraw in the comments!