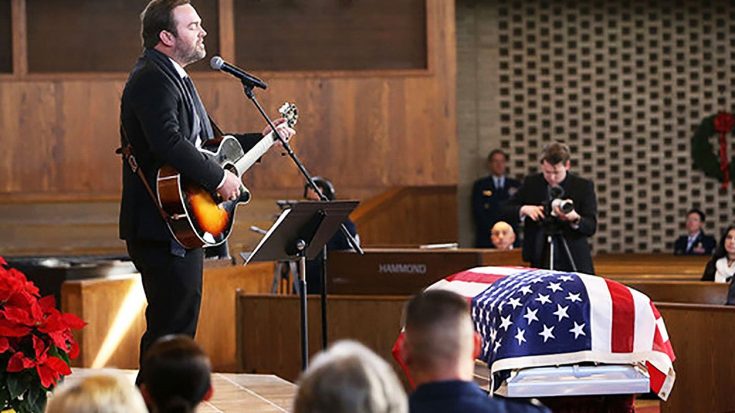 Country music singer Lee Brice paid his respects and admirably performed at a full military honors funeral service for one Air Force Maj. that was finally laid to rest where he rightfully belonged. Maj. Troy Gilbert was killed on November 26 of 2006 in an F-16 crash 20 miles southwest of Balad Air Base, Iraq when he engaged in support of coalition ground combat operations. Gilbert was said to have died on impact, although his body was unretrievable after Al Qaeda insurgents took the body before U.S. forces were able to arrive to the scene of the crash.

After a 10 year wait, Gilbert’s full body has finally been retrieved and given the proper burial, calling for a heroic farewell that he so rightfully deserved. Held at Arlington National Cemetery, Gilbert’s family was present along with a large number of military men and women paying their respects to the selfless hero. Alongside the members was country singer Lee Brice, having had connected with Gilbert’s wife, Ginger, the previous year as she expressed her deep connection to Brice’s hit “I Drive Your Truck”.

According to Nash Country Daily, she explained,

“Troy sold his old beloved truck for a new one about a month before he found out he was deploying. Just a week before he took off for Iraq, he said ‘I think we need to sell my new truck. We really can’t afford to make payments while I am gone.’ So we sold it and he left.”

Ginger explained that upon hearing Brice’s song it wasn’t the new truck that she longed for, but the older model that had previously belonged to Gilbert’s father before he received it.

Brice honored the hero with a heartbreaking performance of Vince Gill’s “Go Rest High On That Mountain” amidst a private chapel service. The star expressed his gratitude for the Air Force Major and being granted the unforgettable opportunity to partake in such an honorable experience. He explained, “I’m grateful for Troy’s sacrifice and I admire Ginger and her family for their sacrifice, also. I can’t imagine what they went through and I’m honored to have been a part of this special moment with this incredibly strong family.”

May you rest in peace, Maj. Troy Gilbert.