Cowboy Tips His Hat To George Strait With ‘Troubadour’ Cover 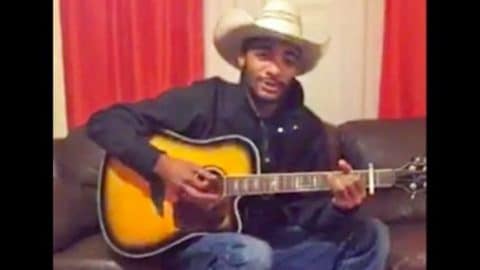 Whenever a country fan hears the word “troubadour,” the first thing they think of is George Strait. “The King of Country” gave the word an iconic status following the release of his 2008 single “Troubadour.”

Surprisingly, “Troubadour” is not one of Strait’s 61 number one hits. In fact, “Troubadour” never managed to gallop any higher than the seventh spot on the chart.

But as proof that chart data doesn’t always determine a great song, “Troubadour” is now considered to be one of Strait’s signature pieces.

As a result, fans often opt to pay tribute to him by performing their own rendition of the tune.

A Standout Rendition Y’all Have To Hear

One such fan is Anton Bushner, who is a bonafide country boy from Parsons, Kansas. Bushner auditioned for American Idol in the past, and currently shares videos of himself singing some of the biggest hits in country music.

Some of the songs he has covered include “Honey Bee” by Blake Shelton, “Wagon Wheel” by Darius Rucker, and “You’ll Think of Me” by Keith Urban.

having a little fun with "ol red" by blake shelton! my camera decided to die during the video so its a short version but i hope you guys enjoy! #keepcountryalive #olblake #godbless Lifted Trucks USA

Back in June 2016, Bushner offered a tip of the hat to Strait when he decided to share his cover of “Troubadour” with his followers. With his acoustic guitar in hand, Bushner softly started strumming along to the introduction of the song. But just wait until he begins singing!

Bushner enters the song with a burst of power, showcasing the strength of his voice from the get-go. That same passion can be heard throughout his cover, particularly when he reaches the chorus.

When it comes down to it, Bushner’s cover is as country as it gets. We’re sure it’s something that y’all will enjoy. Check it out in the video

Impressive isn’t it? What other songs would you like to hear Bushner sing? We think he’d do well with some Johnny Cash songs!

Hey y'all here's my cover of Troubadour by George Strait! Make sure to like and share!! Craig Beachner