By Manly Bryant on August 31, 2016
Advertisement 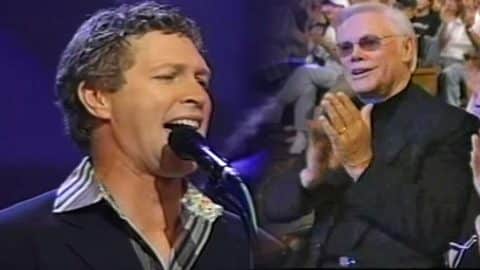 Internationally recognized, country music icon George Jones was, at the very least, a trailblazer in the country music industry. Securing over 150 hit songs and being widely referred to during his later years as “the greatest living country singer”, Jones heavily influenced artists from ﻿﻿both previous and current eras.

Well, when such an icon reaches his 80th birthday, it’s only fitting to throw a celebration fit for a southern king!

With some of the greatest names in country music, such as Alan Jackson and Lee Ann Womack, giving tribute performances to the man that helped shape their musical success, we knew we were in for one hell of a night!

Upon Jones’ classic after classic, country music singer Craig Morgan took to the star-studded stage to give a genuine performance of Jones’ hit “The Grand Tour”, bringing a satisfied grin to Jones’ face.

Morgan, stating before his performance, “I pray that you will continue to be blessed, ’cause you continue to bless us… I gotta tell ya, I’ve been on this stage almost 160 times, and I’ve never been as nervous as I am right now.”

With that, Morgan took the audience on a mental tour through the home of a man who had just been left by is beloved wife and child.

The beautiful tribute called for an incredible applause and a much deserved “good job” from the legend himself! Jones, although passing away in April of 2013, continues to grace the country music world with his timeless hits and everlasting memories.

You can seen Morgan’s performance below!