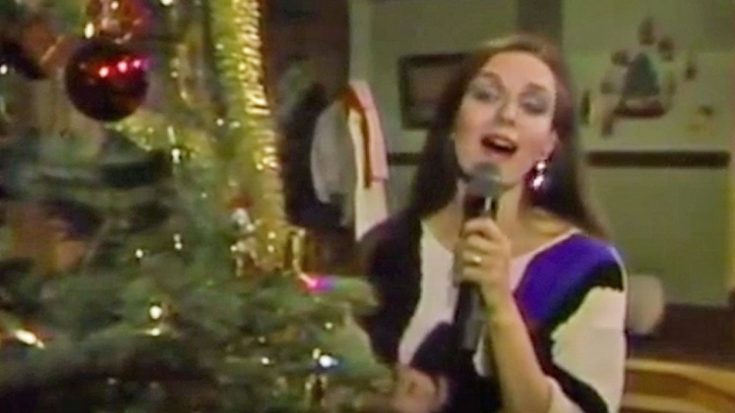 We all know the famous saying, “The best way to spread Christmas cheer is singing loud for all to hear,” and it seems Crystal Gayle got the memo many years ago during a televised Christmas special. She performed several Christmas hits for an adoring crowd.

She began her performance in a snowy town and sang “The Christmas Song.” After her heavenly performance, she came inside the house and chatted about Christmas memories with 3 friends. One friend jokingly asked how Christmas was with her family of 40 siblings, which got a big laugh from the whole audience. As most of you know, Gayle came from a large family of 8 children, including sister Loretta Lynn.

When talking about what gifts she would normally receive for Christmas, she noted that it was usually things she really needed, like socks. During this portion of the TV special, she revealed her favorite Christmas memory.

“The best memory is when all of us got to get together at home. You know, everybody came home, the ones who were married,” she said. “And that really was only one time. Loretta, she made it home with all my brothers and sisters.”

After the group of friends agreed that Christmas isn’t about the gifts you receive, it’s about the people that are around you, one friend said, “You know, the nicest gift you could give us right now, is another song.”

Gayle was more than happy to oblige! She immediately took off to the front door to grab her microphone. The background music to “Rudolph the Red-Nosed Reindeer” began playing as Gayle listed off Santa’s reindeer, including “the most famous reindeer of all.” She seamlessly transitioned from the fun-loving song to the carol “I Heard The Bells On Christmas Day.”

Following the 1872 Christmas hymn, Gayle sang “Silver Bells” and the upbeat song “Sleigh Ride”. She finished the 8-minute performance with “Have Yourself A Merry Little Christmas.”

We could listen to Crystal Gayle sing Christmas music all day!  Enjoy the full performance below.