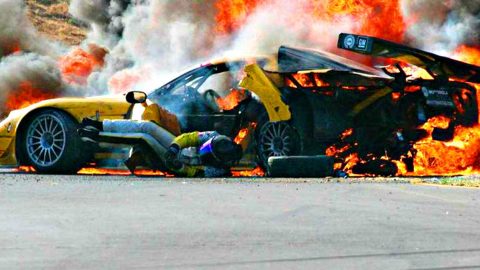 A close call with death, this nightmare of a wreck left the driver trapped in a fiery heap of a mangled car – one that he almost didn’t make it out of.

It was 2004, and Dale Earnhardt Jr. was practicing for the American Le Mans Series race at Sonoma Raceway, when a crash ignited his Corvette and engulfed the vehicle in a massive fireball.

Luckily, Dale Jr. was able to free himself from the flaming car, but not before he suffered burns on his face and legs after the fire overtook him in the driver’s seat. He was airlifted to University of California-Davis Medical Center, and was treated for second-degree burns.

After making a full recovery, the racing star spoke openly with 60 Minutes about how his late father, Dale Earnhardt Sr., was partially responsible for him being able to exit the fiery heap.

Now, in a new post to social media, Dale Jr. relives that terrifying moment through a series of photographs that were hand-delivered to him.

“Someone dropped off some old photos of the [Corvette Racing] car I got burnt up in,” He said in the caption. “Scary day. But it was great spending time with Boris and the Corvette team.”

See all the photos Dale Jr. shared below and be sure to watch the full report on the fiery wreck in the video below.

Someone dropped off some old photos of the @corvette_racing car I got burnt up in. Scary day. But it was great spending time with Boris and the Corvette team.