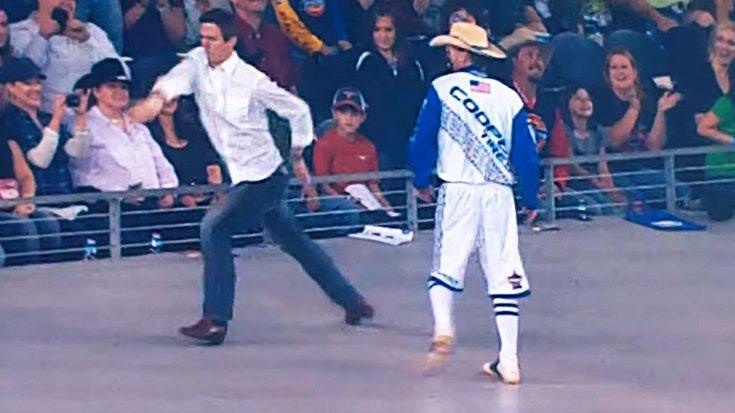 One PBR competition took an epic turn when one rodeo clown challenged an unsuspecting audience member to a dance off! However, this prankster had no idea his competition had a few tricks up his sleeve that sent their audience soaring with cheers and elated surprise!

The determined rodeo clown climbed his way into the stands and met a fellow cowboy who was eager for a greeting! Standing up, the man informed the rodeo clown that he was from Arkansas and currently working in real estate. The clown, after a bit of chuckling, pulled the man onto the open stage before the crowd and cued the DJ to give them a lively beat. As the clown began to pop his hips and show some pretty competitive moves, he was blown away when this underestimated real estate agent stole the show!

The crowd when wild as the former audience member schooled the entertainer, prompting the clown to step up his game and give the crowd a bit of action. Although his worm impressed the eager fans, it was no match for the man’s epic back flip that ultimately landed him with the competition win. “You just got schooled,” the MC blasted through the speakers!

Be sure to watch this killer dance off below and tell us what you thought!