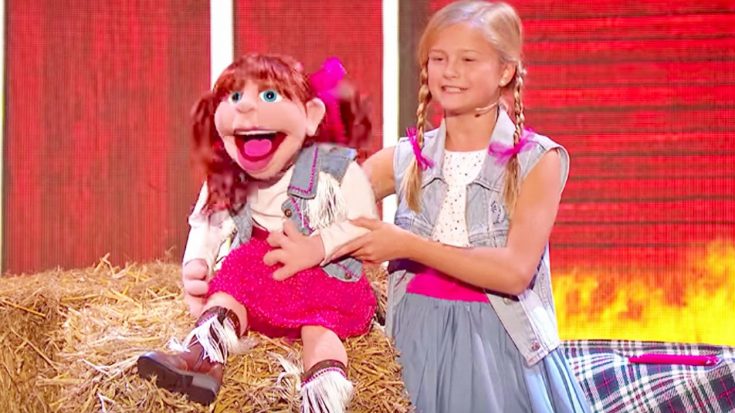 Darci Lynne Farmer made history as one of the three youngest contestants to ever be named champion on ABC’s hit competition series, America’s Got Talent. From earning the coveted “Golden Buzzer” from judge Mel B with her unreal singing ventriloquism routine, it was clear Darci was destined to be a star.

Following her seemingly impossible final routine on the show in which two of her puppets performed a duet to the tune of Beatles hit “With a Little Help From My Friends,” the singer was named the Season 12 winner over her fellow contestants.

However, before America was introduced to Darci Lynne with her audition on the talent competition, she appeared on Little Big Shots UK, delivering an unbelievable performance to the tune of “I Wanna Be A Cowboy’s Sweetheart.”

Dressed head-to-toe in an adorable cowgirl outfit, Darci Lynne and her puppet sidekick Katie blew the audience away with her unearthly ventriloquist act. Prior to their yodeling packed duet, Darci Lynne and Katie exchanged some hilarious back-and-forth banter.

“Well the puppet would like to entertain this nice audience, chatterbox,” said Katie after Darci Lynne took a quick phone call prior to her performance. “Where in the world are we?!”

“We’re here in jolly old England,” responded Darci Lynne, before asking, “Are you ready to show England how we do things in America?”

Darci Lynne learned the art of ventriloquism from yodeling ventriloquist Miss Louisiana, Laryssa Bonacquisti, when she was only 10 years old. Miss Louisiana recently competed in the 2018 Miss America Pageant, going on to place 7th following a series of mind-blowing performances, including her very own act to “Cowboy’s Sweetheart.”

You can watch Darci Lynne’s performance below.