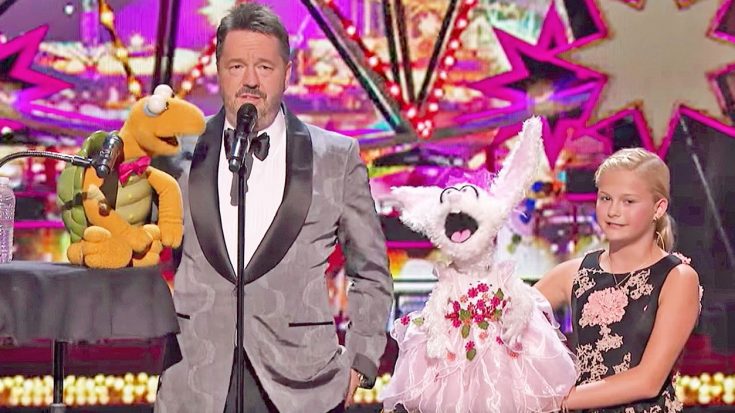 After weeks of wowing the country with her outstanding performances on America’s Got Talent, Darci Lynne got the chance to join her idol on the finale. It seems fitting that Lynne’s idol is also the winner of the second season of America’s Got Talent.

After winning America’s Got Talent, ventriloquist, impressionist, comedian, and singer Terry Fator was signed as a headliner at The Mirage hotel and casino in Las Vegas. As proof of how much faith The Mirage had in his talent, Fator was signed to a five-year, $100 million contract.

Since then, Fator has come to be known as one of the greatest ventriloquists out there. He is well-respected for his use of multiple puppets…15 in total.

When Fator appeared with Lynne on the America’s Got Talent finale, he brought along his turtle puppet named Winston. Also known as “Winston the Impersonating Turtle,” Winston is famous for his many impressions.

But since Lynne is known for singing during her acts, Fator threw the impressions aside and joined Lynne in a duet. Lynne was accompanied by her bunny puppet named Petunia, who instantly started to bicker with Winston.

After sparring back and forth for a little while, Petunia and Winston took their argument in a musical direction. That’s when they began singing the popular song “Anything You Can Do,” which originated in the 1946 musical Annie, Get Your Gun.

Although Lynne stumbled a bit at the beginning, Fator helped her recover. Their duet became more and more impressive as it went on, with Lynne belting out some long, high notes that left the crowd cheering like mad.

The audience was on its feet by the end of the performance, clearly in awe of what they had just witnessed.

Of course, the audience had been in awe of Lynne ever since her first performance. You can relive that magical moment in the clip below.

It’s really no surprise why Lynne won the show, is it?