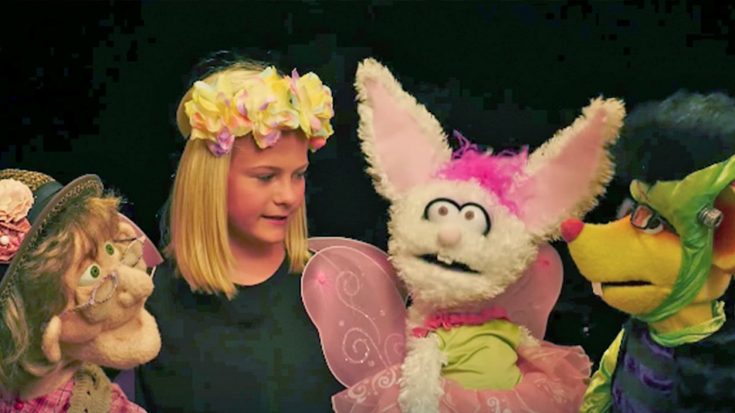 With the rising popularity of America’s Got Talent winner Darci Lynne Farmer and Jeff Dunham’s already legendary status in the ventriloquism and entertainment world, there’s no way they weren’t going to collaborate!

During the finale episode of this past season’s America’s Got Talent, Jeff and Darci did do a short bit together, but it left fans begging for more!

Not only does Jeff perform in front of live audiences, but he also creates hysterical videos with his puppets on his YouTube channel. He invited Darci to be part of his most recent Halloween-themed video.

In the skit, Darci and her now-famous puppets Edna, Oscar, and Petunia hid behind some bushes on Jeff’s property contemplating on whether or not to ring the doorbell because they heard a scary old man lived in the house.

Each took a turn going up to the house and ringing the doorbell, with a different puppet opening the door each time and showing off their personality a little bit. Bubba J was his usual redneck self with Darci, Peanut gave Oscar lots of peanut flavored candies, and Achmed truly terrified Petunia, which is fitting since he’s a dead terrorist.

At this point, everyone wanted to leave, except Edna, who really wanted to get a Snickers bar. She rang the doorbell, this time with everyone by her side, and Walter opened it.

Edna turned on the charm saying, “I was gonna say trick or treat, but you look like a good treat to me! Hubba hubba!“

After making Walter pass out in fear, Jeff finally came to the door and Petunia hit him hard with a hysterical punchline!

“Oscar, you were half right! An old man does live here, but he’s not that scary,” she said.

Watch the full video below to see how that went over with Jeff!