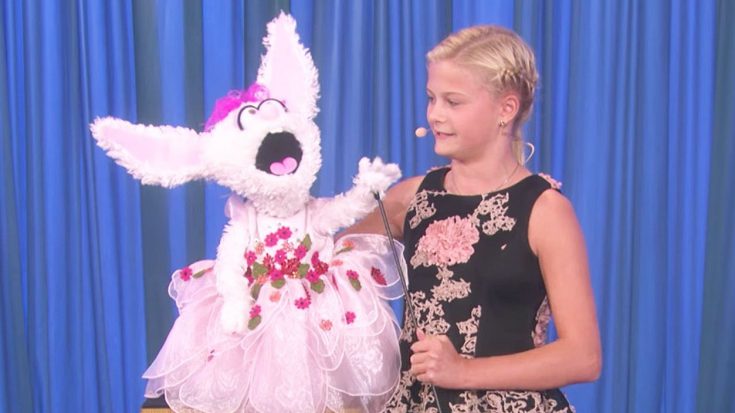 Following her big win on America’s Got Talent, then-12-year-old ventriloquist Darci Lynne was making her rounds to all of the big talk shows. One of those shows was The Ellen DeGeneres show, which shared a clip from her appearance.

The clip opens with Ellen asking Darci how she got into ventriloquism. Darci said that she first watched a ventriloquist at church, and that she was only five years old at the time. However, she wasn’t completely sold that what she was seeing was real.

“There was this guy doing it…I was watching, and I was like, that’s fake, there’s speakers inside the puppets,” she said.

A few years later, Darci met another ventriloquist, and realized that it was actually the person making the puppets talk. After that, Darci devoted herself to learning the art, and practiced in front of her mirror until she got it down.

Hard to imagine that someone who was once confused by ventriloquism ended up winning one of the world’s biggest talent shows as a ventriloquist!

After Darci and Ellen finished talking, Darci walked over to a small platform to begin a performance. During her time on America’s Got Talent, Darci became most well-known for singing as her various puppets. So she decided to show off that side of her talent during her appearance on The Ellen DeGeneres show.

Darci’s voice took on the role of her bunny puppet, Petunia, as she sang the classic Ella Fitzgerald song “Summertime.” The song gave Darci the chance to show off her extensive range, which is all the more impressive considering the fact that she was singing with her mouth closed.

At one point in the performance, Darci took over singing as herself, but Petunia quickly interrupted her. The spunky bunny didn’t want to share the spotlight!

The studio audience jumped to their feet after Darci’s performance. It’s no surprise why…she was outstanding!

Tune in below to watch Darci place the depths of her talent on full display as she and Petunia sing “Summertime.” We wish Darci the best as she continues on her future endeavors!