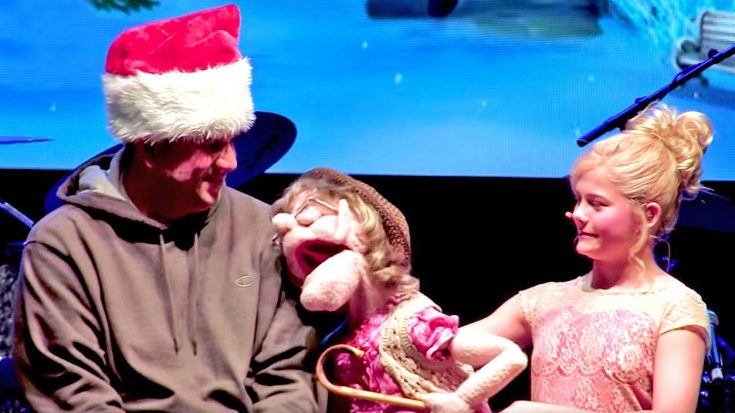 During her time on America’s Got Talent, Darci Lynne Farmer introduced us to several of her puppet friends. One of them was Edna, a feisty, elderly woman who likes to flirt with attractive men.

Edna famously made judge Simon Cowell blush when she serenaded him with Aretha Franklin’s “Natural Woman.” She wasn’t the least bit shy about sharing her feelings for Cowell, once saying, “He’s a hit with the ladies in their eighties back at the home you know.”

Now that Darci has her own stage show, Edna has moved on from Simon and is trying to impress other men instead. During one of Darci’s recent acts, she invited an unsuspecting audience member named Devin to join her and Edna on the stage. Of course, Edna fell in love with Devin in an instant, and tried to win him over the best way she knows how…by singing!

Since Christmas is coming up, Darci has been including some Christmas songs in her acts. Since Edna is known as the flirty puppet in her bunch, and she wanted to impress Devin, it only made sense to have her sing what is known as one of the most flirtatious Christmas songs ever, “Santa Baby.”

Devin was a good sport about the whole thing, and even let Edna rest her head on him a few times. She gazed into his eyes as she sang, trying her best to make him fall head over heels for her. Devin seemed to be getting a kick out of his Christmas serenade, as he could be seen smiling the entire time.

Also, it’s worth mentioning once more just how talented Darci is. The fact that she can sing like that, in a different type of voice, without even opening her mouth, is insanely impressive! Although Edna may not have succeeded in capturing Devin’s affections, Darci certainly won over everyone in the audience with that performance!

If she hasn’t already, Darci is sure to steal your heart as well when you watch her “Santa Baby” act with Edna in the video below. We can’t wait to see what else this girl will be able to accomplish!