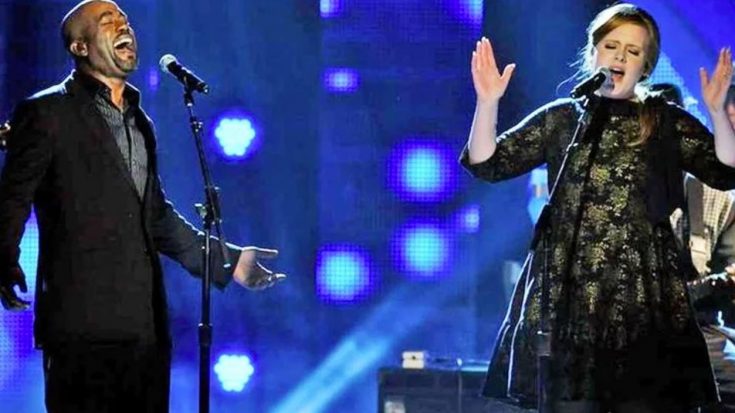 In what may seem like an unlikely series of events, Darius Rucker enlisted international pop sensation Adele to join him in a moving rendition of Lady A’s chart-topping single, “Need You Now.”

Her powerful voice paired with Rucker’s deep southern vocals made for a sultry duet full of soul and passion. Known for her fiercely passionate approach to all of her performances, Adele’s moving rendition of the country group’s emotional ballad left Lady Antebellum’s Hillary Scott in tears.

The performance came about as part of the 2010 CMT Artists of the Year Ceremony honoring the biggest names in country music in celebration of all their accomplishments that year. While the inclusion of a British pop singer in a night created to celebrate country artists may seem random, Adele actually has a deep connection with “Need You Now,” even crediting the song as the inspiration behind her tear-jerking ballad “Don’t You Remember.”

“It’s got quite a country tinge to it. What gave me the courage to try to do that musically was ‘Need You Now,’” shared Adele with CMT. “You could not even change your radio station without it being played. You couldn’t escape it and, luckily, I loved it! (laughs) Or it would have been awful! But the feeling the song gave me, I was trying to channel it in my own song.”

Adele wanted to take a different approach to songwriting for her second album, 21, than she had with her premiere album 19. The singer used “Need You Now” as the root for her newfound approach to music, channeling the song’s storyline of exes wishing to reunite with a former lover into her songs.

“Unlike my first record, when I was writing how ‘your life is going to suck without me and I’ll be fiiiine,’ you know, it suddenly dawned on me that my ex was actually pretty incredible,” admitted Adele. “I wanted to write a song about how it was such a shame that we fell out of love, and we can’t even remember why we loved each other and why we fell out of love. It seemed like a perfect subject, like this emotion could be in a country song.”

You can watch their heart-wrenching duet in the video below!