By Manly Bryant on March 22, 2017
Advertisement 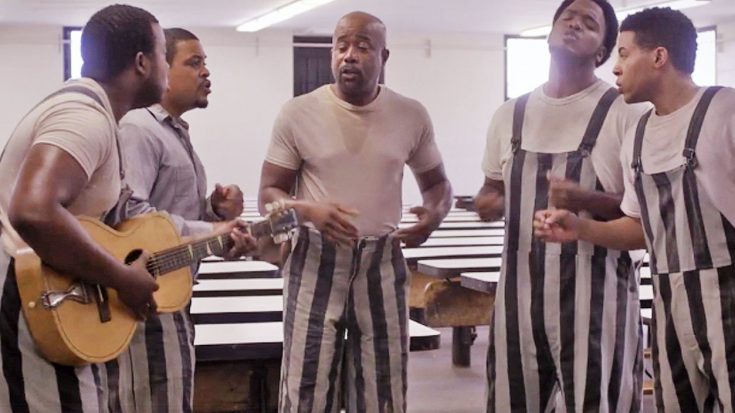 After being charged with six counts of rape, real life criminal Johnny Braggs lived out the remainder of his life behind bars. Taking on the role of the Prisonaires vocalist, Darius Rucker traded in his cowboy boots for a striped jumpsuit in CMT’s hit television series Sun Records.

Surrounded by 20 foot walls wrapped with lethally-charged barbed wire, the Tennessee State Prison made it their mission to keep the dangerous criminals out of the public eye. However, the government facility made an exception in 1953 for five of their exceptionally talented inmates who went on to become universally known public figures.

Donning filthy clothes fitting for Braggs’ crimes, the country singer and his fellow jailbird impersonators sang the Prisonaires’ iconic “That Chick’s Too Young To Fry.” In the exclusive clip, two executives from the label meet up with the prison warden to watch the singing inmates perform, visibly blown away by their immense talent.

The Prisonaires made their unlikely rise to fame in 1953 with the release of their hit song “Just Walkin’ in the Rain,” which went on to reach No.2 on Billboard’s Hot 100. The five-manned band served a combined sentence of 800 years for crimes ranging from larceny to murder.

In addition to Sun Records, Rucker has acted in various television series including CBS’s Hawaii Five-o in the role of a bomb-builder as well as CMT’s Still the King where he played Jesus.

You can check out Rucker’s Sun Records appearance below!

Is that Darius Rucker we spy on #SunRecords?