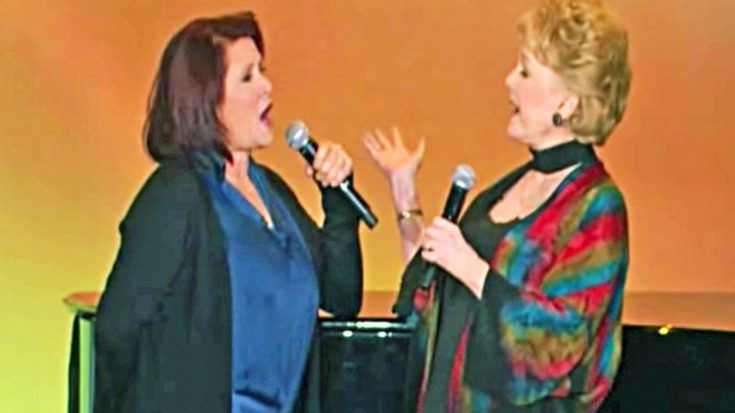 Only a day after Carrie Fisher passed away on December 27, 2016 after suffering a massive heart attack aboard a plane, her mother Debbie Reynolds was rushed to the hospital following a possible stroke, passing away a short time later at the age of 84.

2016 was one of the most devastating years for the entertainment industry, losing icons from almost every genre including Prince, David Bowie and Merle Haggard, fans are able to take solace in the art that continues to live on long after they’re gone.

Fisher and Reynolds were both entertainment icons in their own right. Fisher and her Hollywood legend mother took the stage for an meaningful duet of “Happy Days” and “You Made Me Love You.”

The mother-daughter duo’s duet came about after the two entertainment legends met up for a ground-breaking interview with Oprah back in 2011. Reynolds shared that she always wanted her daughter to sing but she consistently refused her requests.

“You remember when you were just a little girl and you wouldn’t ever sing?” the Singing in the Rain actress asked her daughter. “You always shied away and I always wanted you to sing because you have a great voice.”

The love and respect between the two of them shined brightly as they sang the classic tunes. Even though Fisher said she hadn’t sang in over 30 years, her delivery of the song was executed beautifully.

You can watch the performance in the video below.