Did Jason Aldean Just Get A New Tattoo In Honor Of Brooks & Dunn? 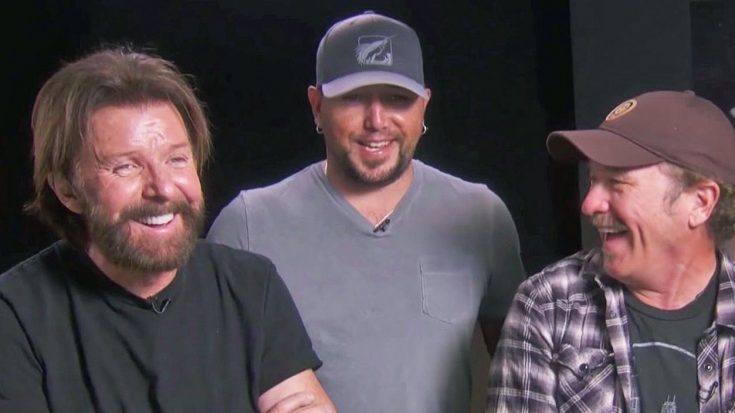 Jason Aldean is a huge fan of Brooks & Dunn, and honestly, who isn’t? The country music duo is one of the most well-respected in the genre’s history, with hits such as “Red Dirt Road,” “My Maria,” and “Only in America.”

During the 50th CMA Awards on November 2, Aldean got the chance to join his idols on stage for a performance. The trio sang “Brand New Man,” and their performance ended up being one of the best of the night.

Aldean was honored to sing with the iconic country duo, telling Rare Country before the show, “These are guys I came up watching on this show and watching these guys perform for years before I got to town.”

A little over a week after his dream performance with Brooks & Dunn, Aldean made a bold statement to further showcase his admiration for them. In an image he shared on his Instagram on November 11, Aldean can be seen sporting some familiar-looking new ink on his arm.

Aldean’s new tattoo is an exact replica of Ronnie Dunn‘s signature ink. Each of the singers now have a tat on their arm in a big, bold font that says “Cowboy.”

However, there is a big difference between the two country stars’ tats. We’re not entirely sure that Aldean’s tattoo is the real deal, because he shared the image as part of a post promoting Dunn’s new solo album, Tattooed Heart.

Real or not, we think the tat looks good on Aldean, don’t you? Maybe Dunn’s started a new trend in country music tattoos!

Aldean doesn’t need a replica of Dunn’s tattoo to prove how much respect he has for him. All the proof he needs is in his CMA performance with Brooks & Dunn, which you can watch below.