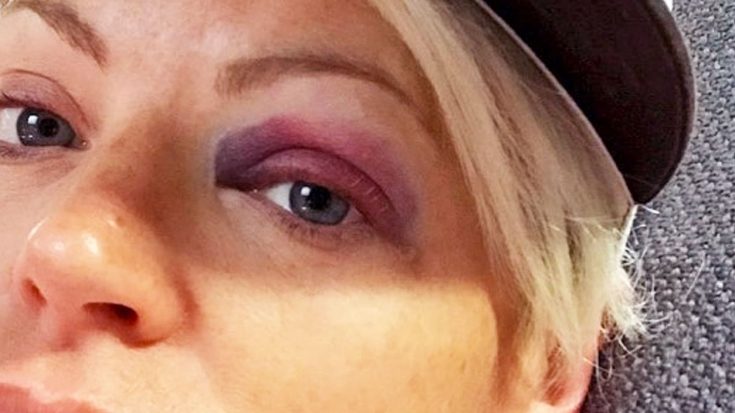 Country stars may be famous, but their fame doesn’t protect them from getting injured. Luke Bryan once broke his clavicle in a bicycling accident, Chris Stapleton broke a bone and had a detached tendon in his right index finger, and Lee Brice suffered a bloody hand injury after being bitten by Brett Young‘s dog.

Sometimes, country stars get injured while minding their own business at home. That’s exactly what happened to Natalie Maines, who recently suffered a black eye.

The Dixie Chicks‘ lead vocalist first shared the news about her injury with a painful-looking photo she posted to Instagram on Tuesday (October 10). Almost her entire eyes was a bright purple color, while the corner was more of a deep blue.

Looking at Maines’ eye, you would think that she got hit in the face with a ball or something. But that is not the case. Instead, a piece of furniture is to blame for the injury.

My face met the edge of a cabinet door. It’s a look.

The following day, Maines shared another photo of her black eye, asking her followers if they saw any progress. It looks less dark to us, but it’s clearly going to need a little more time to heal completely!

Looking better right? Almost like it never even happened. #shiners

Later on, Maines also shared a photo of the culprit cabinet that was responsible for giving her the black eye. She said that she came close to hitting her face on the cabinet yet again that night. Maybe it’s time for her to get some new furniture!

Luckily for Maines, the Dixie Chicks aren’t on tour right now, so she can take some time to recover at home. Last year the group embarked on a multiple-month world tour, which was one of the biggest country tours of the year. Watch a video from one of those concerts below!