Doctor Recalls Desperately Trying To Save Elvis In Emergency Room 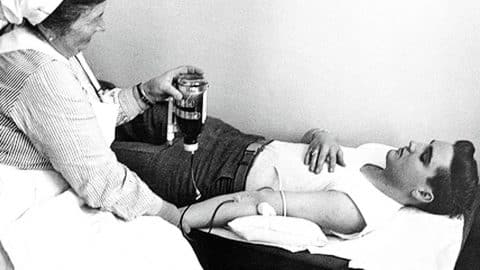 On that fateful day that would change the world of music forever, one of the last persons to see Elvis Presley alive opens up about the final struggle to keep The King alive.

“My friends say I'm actin' wild as a bug, I'm in love, I'm all shook up.” #MusicMonday http://bit.ly/ShopElvisMusic

The Day We Lost Elvis

39 years ago, on a late summer day, the world suffered unimaginable heartache when Elvis was declared dead at a Memphis hospital after being found unconscious on the floor of his Graceland mansion.

Unlike the photo above shows, Elvis was not in great shape when he was admitted to the hospital on the day of his death.

An intern at Baptists Memorial Hospital, Dr. Jerry DeVane recently spoke with Chattanooga News Channel 9 about the final moments of Elvis’ life and his battle to save him in the ER.

“I was just ending my shift when I heard the call for a code to the emergency room,” DeVane tells the news outlet. “When I entered the room, it was absolutely packed with people.”

That’s when the urgency of the situation struck him and he rushed to aide the unidentified man. After one man became weary from performing CPR on the patient, DeVane stepped in to take over and continued chest compressions. It was then that DeVane noticed the unique and striking jewelry adorning Elvis.

Even then, nobody in the room had acknowledged who the patient was, and the medical team was just rushing to save him.

“The Chief Resident was asking questions of the paramedics who had brought him in. He asked them where they picked him up and the paramedics looked at him kind of strange and said, ‘Well, on Elvis Presley Boulevard’.”

“That’s when it kind of sunk in fully that we were resuscitating Elvis.”

They continued efforts to save The King for almost a full hour before they declared the time of death.

While it’s been nearly four decades since his passing, the unforgettable day still is clear in the memories of Dr. DeVane.

The most flowers sold in one day in U.S. history was the day after Elvis Presley died in 1977. pic.twitter.com/m4Dsicdjvh

Watch his full interview with the news station below.