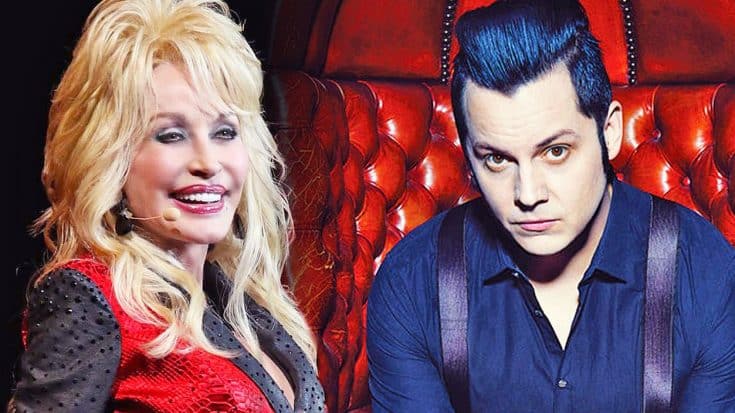 Although Jack White found his claim to fame as the lead singer and guitarist of rock duo The White Stripes, the 41-year-old has a great appreciation for country music and actually has a home in the Nashville area. His connections to the country community don’t end there, and he has strong ties to one of the genre’s living legends.

In 2004, White served as the producer on Loretta Lynn‘s album, Van Lear Rose. The album was a chart success, and peaked at the second spot on the Billboard country albums chart. Critics and fans all praised the album, which also included a duet between Lynn and White called “Portland, Oregon.”

White later went on to co-produce at tribute album to Lynn called Coal Miner’s Daughter: A Tribute to Loretta Lynn, which gave him the opportunity to work with many country stars.

But one artist White hasn’t worked with yet is Lynn’s fellow Honky Tonk Angel, Dolly Parton.

Although Parton is currently promoting her album Pure & Simple, which is set for release on August 19, she’s already looking toward the future. As she told NME, it’s a future that may include a collaboration with White.

Parton says the two of them met recently for dinner in Los Angeles, where they talked about a potential collaboration between the two of them. As it turns out, The White Stripes covered Parton’s iconic hit, “Jolene,” in 2004 and released it as a live single. That cover is just one of many reasons why Parton sees White as someone she can collaborate with.

“I love him to death,” she said. “[The White Stripes] did one of the greatest versions ever of ‘Jolene’.“

Because of her busy schedule, Parton hasn’t had the time to seriously focus on collaborations. But she knows when she’s finally able to carve some time into her schedule, she wants to work with White.

“We talked about the possibility of someday down the road that we may get together to do something,” she told The Guardian. “He would be someone wonderful. And I think we would make some beautiful music together.“

Based on what we know about White, we have to agree with Parton. While you patiently wait for these two great musicians to collaborate, enjoy his duet, “Portland, Oregon” with Lynn.