By Jennifer Pernicano on July 9, 2015
Advertisement 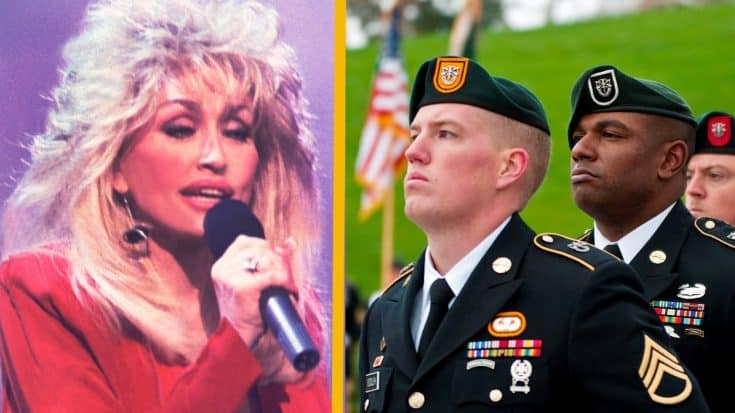 Dolly Parton wowed country music when she released her cover of “Ballad Of The Green Berets.” With songs like “Jolene,” “9 to 5,” and “I Will Always Love You” under her diamond-studded belt, it almost seemed unexpected for her to cover the infamous Green Berets tribute, but lo and behold, here it is and we’re excited to share it with the world.

Parton has always been a huge supporter of our military, but her recording “Ballad Of The Green Berets” might just be her most patriotic move.

The song is a patriotic ballad dedicated to the U.S. Army elite special force team. It was recorded by SSGT. Barry Sadler in 1966 and became an immediate hit, as it casted the military in a positive light. The song was written by Sadler, a medic in the Vietnam War, and Robin Moore. It peaked at number one on the Hot 100 chart and stayed there for five weeks. It was a crossover hit as well.

“The guys in special forces are usually the first ones into the war and often the last ones out. Imagine going into a hostile country, lightly armed, and with just a few men. What they do is so secret, they never get the recognition they deserve and this is the one time I want them to know they’re appreciated,” Dolly states before delivering her emotional tribute that was recorded for her 2003 album, For God And Country.

Whether you listen to Dolly’s rendition or the original by SSGT. Barry Sadler, it will puff up your chest with American pride for those who sacrifice so much for our great nation.

Listen to Dolly’s version below.