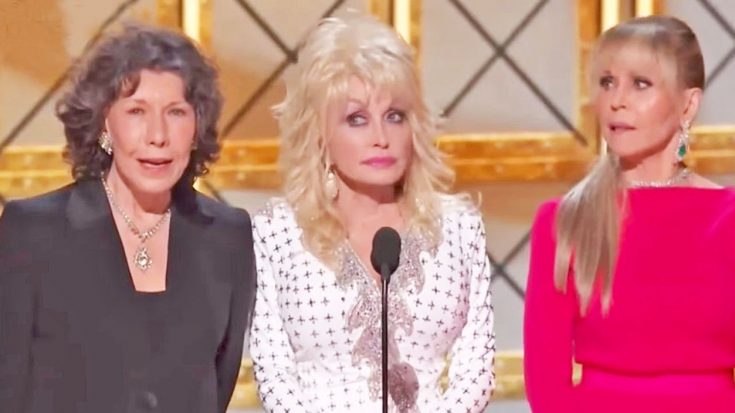 When Dolly Parton and her 9 to 5 costars Lily Tomlin and Jane Fonda reunited at the Primetime Emmy Awards in September, the trio was met with a standing ovation. Fans of 9 to 5 had been waiting for such a reunion for many years, so they were all excited to see its leading stars together again.

But that excitement quickly turned to outrage for some viewers who tuned in to watch the ceremony. During their speech, Tomlin and Fonda made a dig at President Trump, and many viewers did not appreciate the comment.

Parton refrained from participating in the political talk, and remained noticeably silent as her costars spoke. She eventually turned the conversation around with a humorous remark about herself.

Although Parton never said anything about Trump, she instantly came under fire following the Emmys. People criticized her for not saying something to defend him. Others told her that she should have stormed off the stage, feeling that the simple action of standing there next to Fonda and Tomlin showed that she agreed with their remarks.

In the days following the Emmys, Parton was showered with an overwhelming amount of criticism. Despite all of that, she never said a word about the scandal or any of the negative feedback she was receiving.

Finally, nearly a month after the Emmys took place, Parton opened up about the controversy. Speaking to People, she said she can’t let the negative remarks bother her.

“They’re Lily and they’re Jane and I’m Dolly,” she said. “So, they did their thing, I did mine. Oh, we got a little flack from it, but you know, I can’t worry about all that.“

As for why she didn’t chime in to interrupt her co-stars, Parton says she always tries to avoid political talk. She says that since she is an entertainer, she wants to stick to entertaining.

Parton is known for her sense of humor after all, so it only makes sense she would resort to that in times of desperation!

What do you think about what Parton had to say regarding the controversial Emmys moment with her 9 to 5 costars? Share your thoughts with us in the comments.