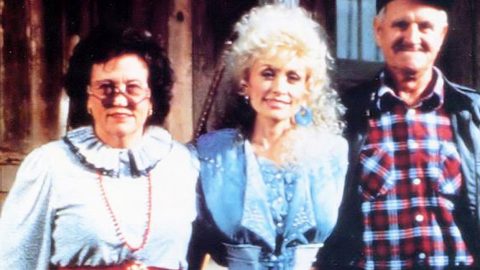 The legendary Mrs. Dolly Parton graced the stage of Jimmy Kimmel’s Live! and reminisced with the beloved talk show host over a statue of Parton that had been put up in her hometown of Sevier County, Tennessee. The striking 70-year-old was honored with a bronze statue that humbly sits near the courthouse and not only reminds residents, but informs visitors, of the young cowgirl from their city that dreamed big and became everything she aspired to be.

As Kimmel eagerly asks Parton more about the monument, Parton kindly asks if she may take a bit of time to tell a quick story that has stayed with her throughout the years. Parton transitions the conversation and begins to tell a story about her father. She explained her love and admiration for her later father, telling of his classic southern man toys, such as his trusty rifle in his pickup truck that proudly sported a “Dolly Parton For President” sticker on its bumper.

“After my dad died, one of my brothers told me that daddy used to put a big bucket, a big oil drum, of soapy water and a broom in the back of his truck and late at night he’d go down to the statue and scrub all the pigeon poop off [the statue],” Parton admitted.

The heartbroken audience erupted in cheers for the tearjerking story as Parton continued with,

“It touched me. I cried my eyes out!”

Of course, Parton being the hilarious firecracker that she is, she ended on a comical note, saying,

“My daddy’s gone but the pigeons are still there – I’m not sure who is doing that now.”

You can watch the interview with the southern gem below.