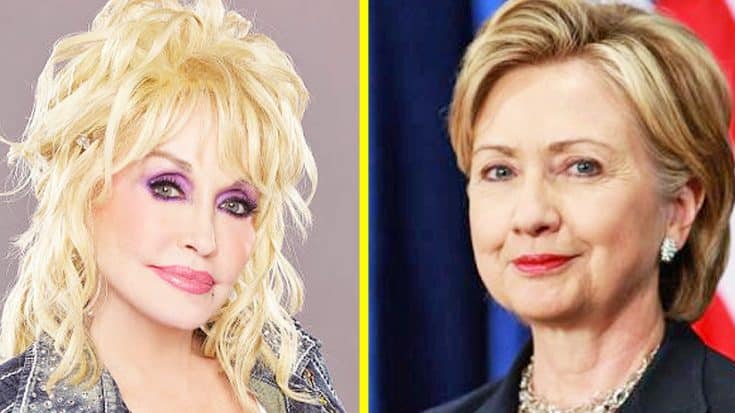 With the presidential race in full swing, reporters are curious to know what today’s country stars think about the candidates. Because of this, Dolly Parton‘s been asked about politics a lot lately, and she’s always had something humorous to say about the election.

Back in March, Parton kicked off the new season at her Dollywood amusement park by revealing the completion of a new roller coaster. Joking with the crowd, she shared that she also had another announcement to make, saying she decided to run for president.

“We don’t have enough boobs, running…right?” she said with a laugh.

Parton kept the jokes coming about the election after her good friend Kenny Rogers referred to her as “The Donald Trump of country music,” because she isn’t afraid to speak her mind. After hearing about Rogers’ remark, Parton commented on the Republican candidate, saying “I guess me and Donald have similar hair.“

More recently, Parton shared her opinion of Democratic candidate Hillary Clinton while speaking with The New York Times. While some of what she had to say may surprise you, what shouldn’t come as a shock is the fact that she maintained her sense of humor while talking about Clinton:

“Hillary might make as good a president as anybody ever has. I think no matter if it’s Hillary or Donald Trump, we’re gonna be plagued with PMS either way — presidential mood swings! But I personally think a woman would do a great job. I think Hillary’s very qualified. So if she gets it, I’ll certainly be behind her.”

While the election has made 2016 a hectic year for many, Parton has experienced a busy year without throwing politics into the mix. She’s currently on her first major tour in decades and is planning the sequel to her highly successful Coat of Many Colors TV movie, among other things.

What do you think of Parton’s comments about Clinton? Do you agree with her? Let us know your thoughts!