For The First Time Ever, Dolly Parton Performs The Hauntingly Beautiful Song ‘Jolene’ 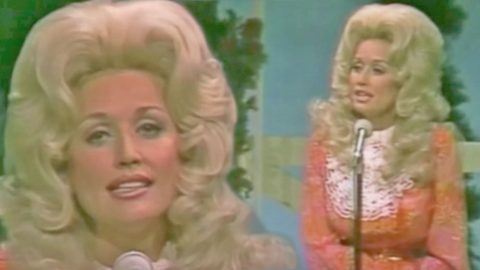 By 1973, Dolly Parton already had several top ten singles with duet partner Porter Wagoner, as well as a solo No. 1 song, “Joshua”. One year later, they famously parted ways, leading Parton to write the song “I Will Always Love You”.

Before that happened, Parton wrote a song that would go on to be one of the best country songs of all time. She wrote “Jolene” after seeing a red-headed woman flirt with her husband, Carl Dean, when they were first married. Although she revealed the woman’s name and appearance were actually based on a young fan who once asked for her autograph, it is a heartbreaking song about a woman begging another to not steal her husband from her.

Like she always did, Parton premiered the song on The Porter Wagoner Show to rave reviews. The hauntingly beautiful song became one of her most well known, and in case you were wondering, this “Jolene” gal wasn’t a problem for too long! Parton and her husband recently celebrated 51 years of marriage!

“Jolene” became her second No. 1 song and earned her two Grammy nominations for Best Female Country Vocal Performance. First, for its original release, and another the following year for a live version. Although she didn’t win those awards, she did eventually win a Grammy for “Jolene” in 2017 for a version of the song with a cappella group Pentatonix.

Watch her first performance of “Jolene” below.