By Jennifer Pernicano on March 5, 2018
Advertisement 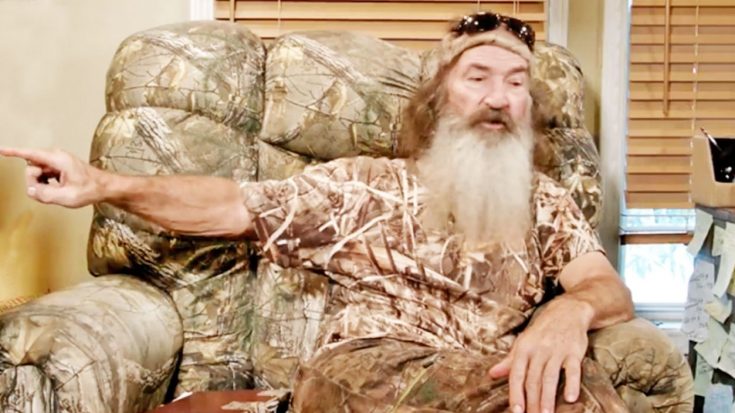 Several months after his family’s reality show Duck Dynasty ended, Phil Robertson announced that he would be returning with a new show called In the Woods with Phil.

The show airs on CRTV, a digital subscription network, and is about his political and religious beliefs.

“For far too long we have been told to shut up. No more,” he said in a preview of the show. “Here’s the deal, America. These are my woods. Out here, I call the shots. Out here, we reject political correctness, or as I like to say, ‘pontificated crap’.”

Luckily for folks who don’t subscribe to CRTV, In the Woods with Phil posts some clips from the show on their Facebook page. Due to the recent school shooting in Florida, celebrities have been voicing their opinions about gun reform, and what to do to stop these horrible mass killings.

Robertson, like many other celebrities, offered up his opinion.

“So here I have an earthly weapon,” the avid hunter said while pointing to his gun. “It’s a firearm. I would never want to use that against another man.”

He then held up his bible and said, “This is also a weapon. It’s called a sword. The sword of the spirit.“

Robertson’s most powerful statement came next.

“You want to stop murder world wide? You’re focusing on the wrong weapon. This,” he said lifting up his bible, “This will stop human beings from murdering one another.”

This clip sparked lots of conversation in the comments section, with fans and opposers debating on whether or not they agree with the Duck Dynasty star.

What do you think about what he said? Let us know in the comments.

THIS will stop people from murdering one another

Here's an earthly weapon and a heavenly weapon. We're focusing on the wrong one.

Posted by In the Woods with Phil on Wednesday, February 28, 2018