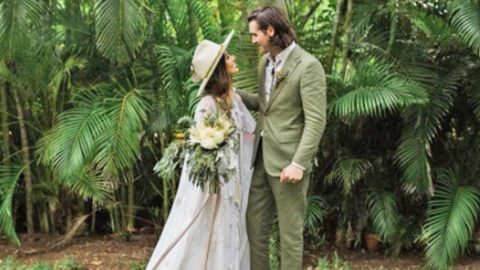 On December 3, 2016, Duck Dynasty darling Rebecca Robertson married her soulmate John Reed Loflin in a ceremony that she called a “tropical fairytale”.

Willie Robertson had the honor of walking his first daughter down the aisle, which left everyone in attendance in tears. Rebecca’s biological dad passed away many years ago, making this moment extra emotional.

We have been re-living this special day with photos from the family on social media, but now they’ve shared the video and we can feel like we were actually in Tulum, Mexico with them!

At one point in the video, John Reed reads a letter Rebecca wrote to him before the ceremony, which made us cry like babies. In it, she wrote that her late father had something to do with their relationship.

“You are the person my dad had planned for me and my Heavenly Father chose for me,” he read.

She then reads the letter he wrote for her, and their words show just how perfect they are for one another and how in love they are. The whole video is stunning with views of them on the beach, during the ceremony, and the reception.

Watch a clip of the video below, and the entire video here.

Our wedding film is up! [ full link in bio ] I am so excited to share this with y'all, we had the BEST TIME EVER! So grateful for everyone for making this day possible. Xoxo, R & JR : @andrewjabajian