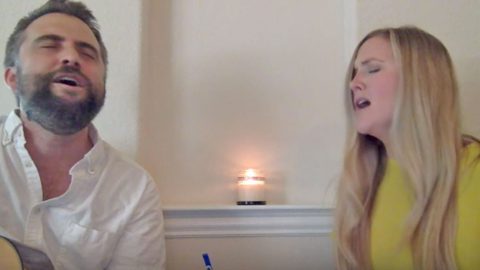 Alex Howard and Kara DuBose first met during college in Abilene, Texas. After singing together only a handful of times, they both knew something special was there.

Since then, they have performed as the duo The Light Parade all around the country, and even internationally. Their influences include The Beatles, Fleetwood Mac, Coldplay, U2, Neil Young, and Joni Mitchell, according to their Facebook page.

They may want to add some country music influences to their Facebook bio because after hearing their rendition of “Tennessee Whiskey”, it needs to be acknowledged.

While George Jones was the original “Tennessee Whiskey” performer, Chris Stapleton took the song to new heights in 2015 at his CMA Awards performance. Since then, people have been covering his take on the song, including The Light Parade.

Howard and DuBose put their own spin on the soulful song, adding a few more spine-tingling harmonies than Stapleton’s version. You can tell how much each of them truly loves music by the looks on their faces when the other is singing a solo.

What did you think of their performance? Watch it below.